We explore the titanic combination of Bastien Vivés and Ruppert and Mulot and look at Joris Van de Moortel’s use of comics to present his art books.

Joris Van de Moortel is a Belgian artist and creative engine combining sound, image and architecture into explosive or detoriating installations and art works that reflect and darkly mirror our society’s fascination with the material world and its structured chaos. Van de Moortel is also a long time comics fan and has embarked upon the novel notion of presenting each subsequent catalogue of his expositions as one issue in a series of comics entitled Cylinder.

Comics is of course a broad subject. If you’re looking for a sequential pictorial account of Van de Moortel’s art works or insight into themes and approach of his installations, then you are at the wrong address (and I suspect this would be too straightforward for Van de Moortel anyway). But what you will find is more like a scrapbook, interspersed with comic pages where Van de Moortel presented as himself does open up his inner thought processes for the world to ravage.

Every Cylinder is a mix n’ match of big images, drawings, notes and Van de Moortel’s monologues in the form of a crude fumetto, explaining (or not) his thought processes. The scrapbook effect presents a mesmerizing prism of images that are not readily understood since Van de Moortel is an artist that works mostly with art installations and motion. However the serial nature of presenting subsequent issues coupled to his exhibitions in a chronological matter is fascinating in the sense that the reader can track the evolution of Van de Moortel. There’s no ‘story’ flow but a sense of artistic and visual evolution.

Cylinder is a fascinating concept where Van de Moortel’s obsession with chaos and structure is mirrored on the printed page. It mixes up the concept of art catalogues with comic books and creates a fascinating insight on paper into the mind of a creator that is known for its vitality and originality.

Cylinder 1-2 by Joris Van de Moortel is published by Mer.Paper Kunsthalle. They are oversized full colour books counting 48 pages and retailing for €10. 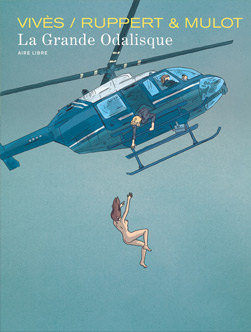 Action! Violence! Independent chicks with guns! Art robbers, professional thieves and lovers! I am not talking about the new Tarantino movie but about the latest comic from the hands of alt geniuses Bastien Vivés and the satirical and iconoclastic duo of Rupper & Mulot. An action movie on paper was the last thing I expected from those creators but here it is.

After their hit on the Musée D’Orsay in Paris; the spunky trio of Alex, Carole and Sam plan to take on that most famous of French art temples: Le Louvre that houses Ingres’ La Grande Odalisque. Complications arise however and soon they are embroiled with Mexican drug cartels and on the run from the law.

Don’t expect a deconstructionist tale tearing the action caper apart though, La Grande Odalisque is a straightforward action story with caper influences. It’s not too clear on what influence Vivés had on the story but Ruppert & Mulot bring forth three strong independent women and the combination of snappy dialogues and a speedy story are all superbly enhanced by the stellar artwork of Vivés. His digital line work is sketchy and agile befitting the characters and fast rhythm of the storytelling as is his sense of rhythm emulating a certain Japanese manga feel. He excels at drawing sexy females so this action piece is right up his alley. He also tends to spend a lot of attention to the surrounding space which – once again – befits the action nature of the story with grand Parisian settings.

It doesn’t pay to pay too close attention to the story. Since Ruppert & Mulot crafted a flashing fiction piece, this type of story depends on speed and characters and they deliver in spades. Vivés turns in the usual superb pencilling and turns La Grande Odalisque in  a thrilling action movie on paper.

La Grande Odalisque by Bastien Vivés, Ruppert & Mulot is published by Dupuis. It is a full color oversized hardcover counting 122 pages and retails for €24.95. This review was based on the Dutch edition, published by Ballon Media.