This Summer’s bundle of goodies from Oily Comics marked an exciting development, as publisher Charles Forsman brought us the first English translation of works by two exciting European cartoonists who very much share his artistic and publishing ethos. 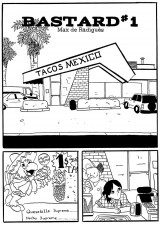 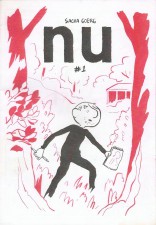 Sacha Goerg and Max de Radiguès are both members of the Brussels-based publishing collective l’employé du Moi, which has published the French-language version of Forsman’s highly acclaimed The End of the Fucking World. It therefore makes sense that he would return the favour by producing English versions of some of their own mini-comics, which were produced in a similar mode to the old Oily minis.

It focuses on a pair of fugitives, whom I took at first to be mother and son but who are apparently an older sister and a younger brother. With a refreshing lack of clumsy exposition we’re thrown straight into their life on the road, as they have to pack and flee when a face from their past turns up. 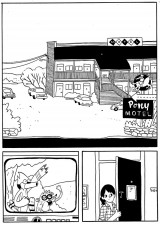 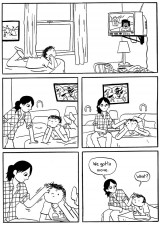 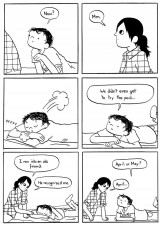 We’re gradually drip-fed a few more details of their situation, and it turns out that we’re in a tale of dishonour among thieves, with potentially murderous consequences.

In synopsis, this sounds like fairly run-of-the-mill genre stuff, but it’s executed with great skill. De Radiguès draws in a slightly cartoony ‘big eye’ style, but his strong, spare storytelling exerts a firm grip on the reader.

The intensity and trust of the main relationship is made palpable, along with the exhausting reality of life on the run. It’s also interesting to see a European take on the archetypal US road-movie narrative, complete with cheap motels, bleak desert landscapes and highway cops. 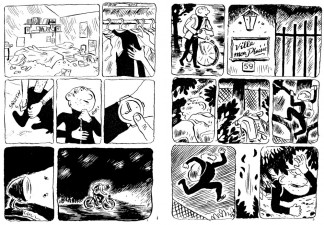 In Nu #1, the Swiss-born Sacha Goerg uses a looser, much busier style for his story of voyeuristic art student Jean-Michel (the first three minis of which are collected here into a 24-pager).

However, like Bastard, it’s an intriguing opener that mixes mainstream narrative engagement with indie creative charm

Captivated by the alluring Iéléna, Jean-Michel lurks into her garden one night to draw her. However, when he is surprised by a guard dog, he loses his sketchpad. The story then takes a novel twist as Iéléna finds the book and turns the tables, using the college noticeboard to lure her unknown voyeur back for a ‘private’ performance that has unexpected consequences.

While Bastard focuses primarily on the vital, isolated relationship between its two leads, Nu creates a wider world, with an air of as-yet-undefined menace about Iéléna’s home life and a supporting cast of college friends who have their own suspicions about Jean-Michel’s, ahem, sketchy behaviour.

This has been a very interesting move by Forsman, which brings a slightly different flavour to the Oily package; with their emphasis on engaging storytelling and more mainstream worldbuilding, Bastard and Nu feel a little more outward-looking than a lot of the US minicomics I’ve read.

Forsman is to be applauded for casting his search for talent a bit farther than most, and I hope we get to see more international talent made available through Oily as his own work travels around the world and connects with kindred spirits.

(If your French is up to it and you can’t wait for future Oily translations of Bastard and Nu to appear, the original issues of both series are available from their creators at a mere €1 a poke: Bastard – aka Batard – is now up to #5, while Nu has reached #15.)