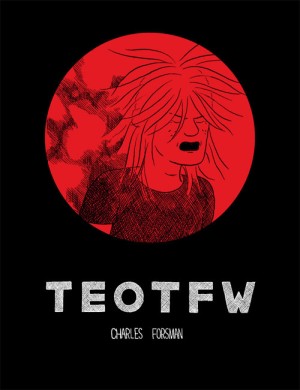 Originally published via his minicomics imprint Oily Comics, Charles Forsman’s The End of the Fucking World was recently collected by Fantagraphics Books. Now, for a committed champion of SP books like my good self, this compilation is indicative of a most pleasing growing phenomenon of late; that of bigger publishers picking up small press/self-published work. Here in the UK we’ve seen Blank Slate Books pioneering this strategy in recent years (Oliver East’s Trains Are… Mint and Donya Todd’s Death & the Girls to give just two examples) and Myriad Editions also playing a major role (Nicola Streeten’s Billy, Me & You, Aneurin Wright’s Things to Do in a Retirement Home Trailer Park) with both Titan Books (Martin Eden’s Spandex) and Soaring Penguin Press (the upcoming collection of Howard Hardiman’s The Lengths) on board as well. It underlines the validity of the micro-publishing route to a potentially larger audience and the ever burgeoning, ever remarkable levels of talent on show in the current small press scene.

But before I digress too far with one of my self-publishing evangelising sermons let’s return to the specific project at hand. If Oily Comics have had two signature books in their delightfully old school minicomics publishing programme then it has been Forsman’s The End of the Fucking World and Melissa Mendes’s Lou (reviewed here previously in ‘Small Pressganged’). Books that are, perhaps, poles apart in terms of tone but structurally very similar in approach, each adopting the same monthly serialised 8-page episodic format.

The premise of TEOTFW, as it’s titled for the Fantagraphics edition, is one that may not seem particularly exceptional or groundbreaking on a first, cursory consideration but this is a book where execution is everything. Ostensibly it’s the story of James and Alyssa, two very disturbed teenagers on the run, and their self-destructive and ultimately doomed journey. But on a more nuanced level it’s a far more subtle examination of human nature and what makes us what we are. 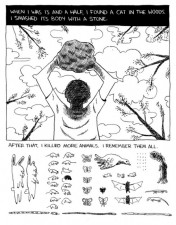 James appears to have been born fundamentally incapable of empathy and devoid of emotion. In early sequences we observe his inability to understand humour as a child, his almost clinical lack of conscience in butchering animals, and his horrific experimentation with attempting to evoke some sensation of feeling by putting his hand through a garbage disposal unit. In contrast, Alyssa seems to have been shaped by her circumstances, history and past, especially the lack of a father figure in her life and her aversion to her current domestic circumstances living with her “mom and her pervert boyfriend”.

This odd couple, then, embody the conflicting sides of the nature versus nurture debate. Their relationship, superficially at least, initially appears to be a symbiotic one. Each of them is, for their own reasons, drawn to the other to fulfil something lacking in their own lives. For the detached James it’s in hope of connecting with a missing emotional core, for Alyssa her boyfriend represents freedom, an escape from a stifling home life and someone who needs her presence in his life. As the book progresses that relationship will both evolve and reveal its hidden intricacies, as the fugitives make a powerful enemy after a housebreaking goes horribly awry and Alyssa seeks out her estranged father. 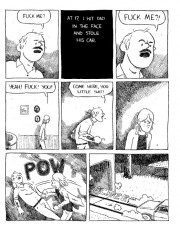 The sixteen original issues of the comic translate to sixteen short chapters in the book wherein Forsman constantly shifts perspectives between his two protagonists. To a degree the nihilistic attitudes of James and Alyssa echo those years of teenage displacement that we have all experienced where our place in the world seems less clear, less defined. But in the case of these characters there’s an obviously more pronounced reaction to that feeling of youthful alienation.

Forsman’s storytelling is flawlessly economical here, nothing is superfluous and there’s no padding. It’s a similar tale with his visuals; they’re efficient and sparing, yet expressive and deeply affecting. At times his characters appear to have wandered out of a Sunday newspaper comics supplement and into the wrong narrative entirely, but that stripped back design makes them all the easier for the audience to identify with. And that’s one of the greatest strengths of TEOTFW: Forsman has the ability to make protagonists who are capable of committing quite monstrous acts sympathetic, and even tragic, throughout. 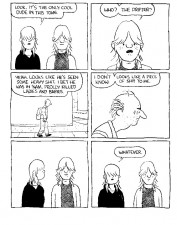 Having gone to all the effort at the top of this piece to commend publishers who collect small press/minicomics work I’m going to sound slightly contradictory now by saying that if you do acquire and enjoy the Fantagraphics edition of The End of the Fucking World based on the strength of this review then please give some consideration to buying future Oily Comics output in its original serial format. Oily offer subscriptions a number of times a year giving you a selection of minicomics by a variety of creatively adventurous artists every month. As I said in my review of Lou in this column a few weeks back, that episodic reading and the feeling of anticipation it engenders really adds something extra to the experience. And the rapidfire pacing of each TEOTFW chapter highlights the book’s original intention in terms of delivery. With the “written for the trade” mentality we’ve lost that appreciation of the particular thrill of the serial form in comics in recent years. Comics constructed to be read in intermittent parts should be read in that manner. Give it a try. What have you got to lose?

James and Alyssa’s voyages of self-discovery are hardly ones that conclude in redemption but they do, perhaps, end in a form of enlightenment. Forsman’s The End of the Fucking World is both fatalistic and poignant, and a collection that I sincerely hope raises the profile of the worthy Oily Comics to a significant degree.

TEOTFW collection is published by Fantagraphics Books priced $19.99. For more on Oily Comics check out their site here. Details on Oily Comics subscriptions can be found here.