Melissa Mendes’s Lou follows the adventures of the titular 9-year-old tomboy, her two brothers – the younger John and older Eddie, and an extended cast of friends and family. Published by American minicomics specialists Oily Comics, fifteen issues of Lou have been produced to date. Sometimes the events of an issue can be relatively self-contained and slice-of-life (Lou and her Dad choosing a new family pet in #2 for example or the kids dealing with bullies while trick-or-treating in #4) while on other occasions they’re advancing longer-term plotlines. What doesn’t vary though is that each number of Lou is presented in the same bite-sized, easily digestible 8-page monthly format. 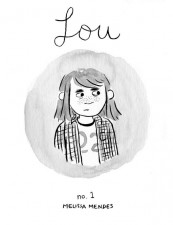 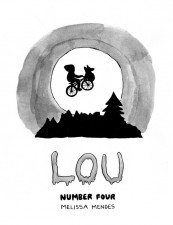 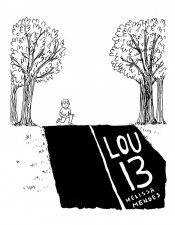 Lou and her brothers are the main focus of the book and there’s certainly an element of soap opera sequential art to the proceedings here. What first attracted me to Lou was the interaction of these three characters. Mendes provides subtle and yet still highly expressive observations about the relationships between siblings; the rivalries, the affection and those nuanced complexities that exist between brothers and sisters. It’s all beautifully underplayed and all the more effective for it.

There are two interweaving ongoing story arcs that have come very much to the forefront in recent months in Lou. The first concerns the dodgy dealings of Joey, Eddie’s boss at the local pizza shop and the second involves a mysterious abandoned building set up on the inside like a film set for a sci-fi movie that the local kids have adopted as a den. Throughout both these strands it’s the manner in which Mendes captures a child’s eye view on the vagaries of adult life that most impresses; those understated little reflections on the incomprehensible whims of a grown-up world. 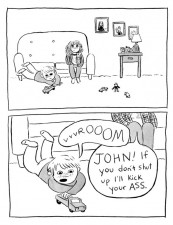 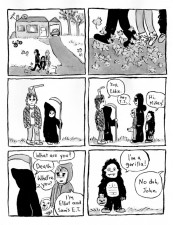 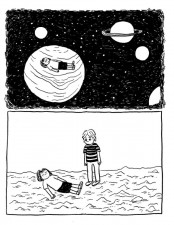 Mendes’s visuals are accessible and unpretentious with the interplay between characters being particularly deft in approach. Just check out the body language between Lou and Eddie when little brother John goes missing in issue #14. It’s wonderfully realised with a single hug speaking untold volumes about the relationship between the two. I also have a certain fondness for the personal notes from Melissa at the end of each issue that accompany the strips and create a feeling of familiarity between creator and reader.

We live in an environment now where immediacy is king and the eager anticipation of waiting for the next small instalment of our favourite serial segment of pop cultural entertainment is slowly being eroded away by the likes of the trade paperback and the box set. What Oily continue to give us with books like Lou is the philosophy of old school small press minicomics at its very best. You can, of course, buy all the issues to read in one sitting from the online Oily Comics store but to enjoy Lou as it was meant to be read it should be via an avidly awaited Oily subscription at just eight glorious  pages of story every four and a bit weeks…

Lou #1-15 are available to buy here from the Oily Comics store priced $1.00 each. For more on Oily Comics check out their site here.