Science fiction anthology book The Psychedelic Journal of Time Travel is a collection of one-shot tales overseen by the same editorial eye that brought us last year’s rather witty Doctor Who-themed compilation Doctor WTF?!, reviewed here at Broken Frontier. Fourteen offerings of chronal chaos and twisting temporal troubles rest between its pages courtesy of a sprawling cast of small press creators; some familiar and some less so. 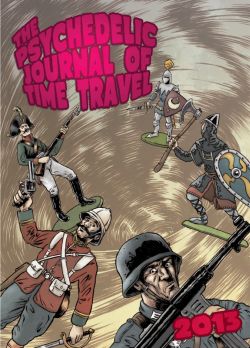 Earlier this week, when reviewing Elena Vitagliano’s The Deep Needs Train, I commented that the short story is a narrative form that requires a highly defined skill set, and put forward the example of 2000 AD’s use of their Future Shocks one-offs as a training ground for up and coming writers to illustrate this. At the risk of sounding tediously repetitious I’m going to make the same observation here in regards to The Psychedelic Journal of Time Travel. The crew involved in this comic have between just one and four pages to hook the reader, advance the plot and resolve it with a compelling twist; an exercise in clear, economical storytelling that’s notoriously difficult to pull off.

For a reviewer, of course, a collection of short stories that exists to build up to an unlikely twist or a cunning punchline in the last panel or two is, by definition, a little difficult to analyse in detail. The whole point of these tales is obviously for you, the audience, to make those discoveries yourselves. So be warned! I’m almost duty bound in any discussion of the book’s contents to be somewhat oblique in observation and cautious in commentary when it comes to the specifics of each segment’s structural workings.

I will say Mike Lynch and Neil Ford’s ‘3000 Dollar Second’, set in a mining colony on a Martian moon, is quite deliciously morbid in its execution with effectively brooding visuals. And Ryan Tandy and Jake Rowlinson’s ‘Consequences’ took the cliché of the portentous time-travel mission to the past and turned it on its head in some style, while Mike Harding and Lee Smith’s ‘The Simple Rules of Time Travel’ is a neat little treatise on trans-temporal etiquette that brings a wry smile to the face with amiably quirky layouts.

I also rather liked Stephen Prestwood’s ‘The Journey’, a cautionary knight’s tale, simply because it was such an atypical use of the time-travel motif. What’s more, Adam Page and Steven Denton’s Lovecraft meets Battle Action Weekly offering ‘Were, Are, Shall Be’ has a certain pulpy appeal. Oddly enough, though, the probable highlight of the issue for me was also the entry with the slightest plot  – Geoffery Crescent and Darren Stephens’s account of Vegan eco-warrior Cuthbert Wax and his disastrous trip to the past to alter the timeline and ensure a herbivorous destiny for mankind. Gloriously silly fun!

Admittedly there are elements here that will perhaps seem a little too familiar and, dare I say it, even a tad predictable. But in an anthology about time-travel it would be conspicuous – indeed perhaps even sacrilegious! –  if those more obvious tales of predestination and paradox were absent. Regardless, this is an infectiously enthusiastic collection from editor Owen Watts, assistant editor Geoffery Crescent and their vast team of contributors, and a most worthy successor to Doctor WTF?!.

You can buy a print copy of The Psychedelic Journal of Time Travel here priced £5.00 or £2.00 for digital. You can also follow the Journal on Twitter here and visit their Facebook page here.