Ryan Taylor’s The Grinning Mask is an intriguing fusion of (initially) the sensibilities of a past age of UK weekly comics with the more creepy overtones of the best of the 1950s EC horror range. To date three issues of the have been published with what began as a fairly standard supernatural mystery story becoming far more layered and experimental as each new chapter has been published. 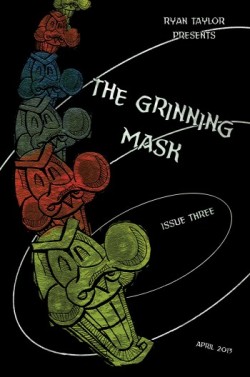 It will be difficult, obviously, to discuss all three issues of The Grinning Mask without giving away some significant plot elements so be warned some mild spoilers will inevitably follow. The opening instalment focused on schoolboy Jack, a horror comics-loving youngster, and his chums, and their nocturnal foray into a graveyard. It’s the sort of “dare”-type behaviour that we expect from kids but the group of pals have picked the wrong night to sneak out and play mischief. Something sinister has been awakened in the depths of the church and the boys’ brief encounter with a shadowy figure there leaves Jack with recurring nightmares of a hideous grinning masked figure.

In the following issues the story expands to a wider cast of characters as the local clergyman Reverend Saunders discovers an unearthed tomb within the church that suggests something has broken out from within its walls. How does this tie in with the ancient legend of a travelling jester known as Archibald Sommers? Who is murdering local residents in ever more bizarre yet apposite ways? And what primeval malevolence lurks at the heart of this otherwise quiet and ordinary little town?

These three issues of The Grinning Mask have been produced over a period exceeding a couple of years and, as such, Taylor’s growing confidence as a storyteller becomes markedly more obvious with each issue. As I mentioned at the top of this piece, that opening part reads like an entertaining enough but ultimately forgettable ghost story. It’s when Taylor picks up the tale again with the second issue that The Grinning Mask really comes into its own structurally. As the freed malicious presence begins to pick off the townsfolk Taylor veers the narrative off into cleverly rendered interludes written and drawn in the style of old EC Comics, complete with suitably macabre titles and verbose commentary.

By the third issue Taylor has adopted a slightly larger page size for the book giving his art a chance to shine on a larger canvas. Here, the story jumps backwards and forwards from centuries past to the current day with the visuals adopting a winning juxtaposition of the everyday and the utterly grotesque as we learn more of the origins of the supernatural entity at loose in this small provincial locale and just why it is adorned in that hideous mocking headwear. It all progresses with a palpable sense of fatalism as forces beyond the comprehension of the locals conspire to toy with their lives. 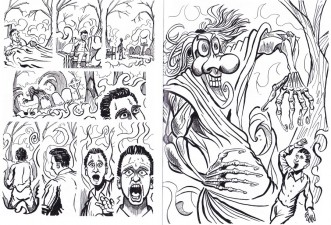 There’s one more issue to go before the chronicle of The Grinning Mask comes to its conclusion and I do hope Ryan has plans to collect the series in one volume after that. It’s a knowing homage to the horror-themed comics that many of us will have had our passing obsessions with at some point in our youthful collecting pasts (indeed there’s a nice little reference to a short-lived British cult classic from that genre in the second issue) and  a book that improves in leaps and bounds from chapter to chapter. Well worth a look for you fright-fans out there!

You can pick up all issues of The Grinning Mask here (including a special pack of all issues for just £5.00). To find out more about Ryan’s work check out his blog here.