Jazz Greenhill’s The Festival follows the misadventures of Ari, Lynda and Rob, three kids attending their first music festival with their parents. This troublesome but endearing trio sneak out of their tents late at night to explore this exciting new environment, discovering an alien and grown-up world that will, in equal measure, evoke sensations of awe, curiosity and wonder…

I first came across Jazz Greenhill’s work via last November’s Comica Festival Comiket when I picked up her minicomic Source of Distraction; a somnolent six-pager that focused on a young man trying to get some sleep while the noise and diversions of the world outside his window interrupted his slumber, impinging on his dreams and disrupting his reverie. There were echoes of the early pages of Maurice Sendak’s Where the Wild Things Are to it as its protagonist drifted in and out of unconsciousness, shifting from reality to sleep and the blurred spaces in between. It was also notable for a very assured command of the comics page and a confident understanding of those storytelling techniques unique to the form.

The Festival is a charming little tale of the strange rituals of adult reality as perceived from a child’s perspective. Greenhill has an acute ear for the particular nuances of squabbling childhood banter which she uses to great effect in bringing life to her young cast of characters, ensuring that the readership are invested in Ari, Lynda and Rob from the very beginning. As they embark on their illicit nocturnal exploration of the festival grounds we observe not just their encounters and reactions to the excesses of the partying lifestyle therein but, as the kids become lost and separated, we also witness those complex familial bonds that exist between siblings. It’s quite beautifully played, underlining that strange mix of rivalry, conflict and concern that characterises the youthful brother-sister relationship.

The first creator I thought of when reading The Festival was Jon McNaught. Not for the obvious reason of a similar use of multiple small panels on a single page but, rather, because Greenhill also has that same narrative knack for making the small moments matter. The book is presented in a landscape format and for the most part uses tight, cluttered layouts. My initial feeling here was that the art could have done with a larger page size to let Jazz’s lively illustrations breathe more but, on a second reading, I found myself changing my mind because the confined arrangement of images here perfectly evokes that bustling, claustrophobic feel that characterises the festival experience. 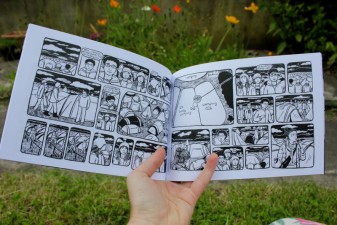 What did I say earlier about noting that we have a creator here who shows an innate understanding of what can be communicated with sequential art that can’t be replicated elsewhere? Interspersed throughout the story are one-panel maps illustrating where the kids are in relationship to each other and to their surroundings. It’s a neat trick visually to mark location and a sense of displacement and one that is highly effective in the latter sequences where it also builds up an impression of disorientation and panic.

The Festival is published by Avery Hill Publishing (Reads, Grey Area) and for many, no doubt, will serve as an introduction to the work of Jazz Greenhill. I would suggest bookmarking her site and keeping an eye on this new creative voice because I suspect we have a very special talent-in-the-making here…

The Festival is available here priced £3.50. For more on Jazz Greenhill check out here site here. You can find out more about Avery Hill Publishing’s output here.