In this month’s report from the Process group at London’s Gosh! Comics, Eustace’s S.J. Harris gives some fascinating insights into his new book from Jonathan Cape. 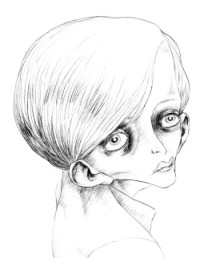 We welcomed some new faces to Process this month as we were joined by the team from Avery Hill Publishing, a small press outfit from South London [the Broken Frontier review of Avery Hill’s latest issue of Reads is here] and a number of contributors from The Comix Reader [BF review here], including Maartje Schalkx, Elliot Baggott and Mike Medaglia. Mike also had a major update on his Wu Wei project which has not only made it into Previews but is a Featured Item this month (taking its place between Marvel’s Age of Ultron trade paperback and some Doctor Who figures!) [Check out BF’s interview with Mike on Wu Wei here]. Other attendees included Matt Boyer of ‘Let’s Do Comics’, Paul Shinn, Owen D. Pomery, the team from Backwards Burd and Matthew Duncan from W.I.P.

We also had a request from John Dunning, who was unfortunately unable to attend, but is looking for an artist for his new project. John says: I am just completing a long form comic script and I’m after a very particular type of artist to realise it – this spread attached below is the kind of style I’m looking for. It would be colour, and quite realistic, but with a definite style – I really like the architectural and design element of these pages too. Very cinematic – think Rosemary’s Baby meets Hitchcock. 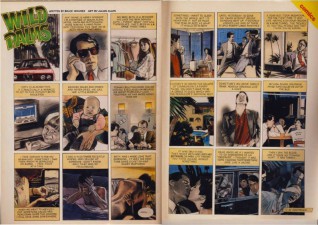 The genre of the piece is crime, with a twist of Noir, and is set in contemporary North London. Someone similar to Sean Phillips or Frazer Irving would be ideal. The idea is for the artist to work up a few pages as a part of the proposal that my agent is submitting to a top UK publisher in a few months, so it’s not too labour intensive.Ideally this would be a young British artist as I’d like to be able to work closely with them.

John has had a book published previously called Salem Brownstone, so there’s real potential for this project.

This month we were lucky enough to be joined by S.J. Harris, the creator of a wonderful new graphic novel Eustace which was recently published by Jonathan Cape [BF review here]. Steven’s book is the subject of this month’s Comics Gosh!p, a reading group that Gosh! is home to each month hosted by Mike Medaglia and Mark Haylock, and we thought it might be interesting to get Steven’s take on the making of the book before hearing how the group responds to it as a piece next week. 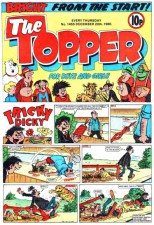 We opened by talking about Steven’s early relationship with comics and his initial contact through the likes of Topper (right) and Oink!. Steven made an excellent point about creativity generally with his observation that when people asked ‘When did you start cartooning?’ his feeling was that it was more relevant to ask when people stopped, given the massive output of drawings and pictures that children routinely produce!

At university Steven had cartoons and strips published in the student paper and once he’d graduated looked to continue this by submitting work to Private Eye and The Oldie but never made it into print. However his discovery of H2G2, an online showcase for creativity developed by Douglas Adams, gave Steven a home for his work. This is actually where ‘Eustace’ was first presented, albeit in a very different form to the work that has seen print. The Eustace that appeared on H2G2 was essentially a text story with spot illustrations, while Steven’s other strand on there, Paper Cuts, is more traditionally cartooning and comics, and it was essentially by blending these two disciplines and projects that the book began to take form.

Steven submitted three chapters of the book to Random House and they eventually found their way to the offices of Jonathan Cape who got in touch to say that they were interested in the book. By this time Steven had made some very strong creative choices about the project, firstly that it would be in Black and White and, more significantly, it would be rendered entirely in pencil. 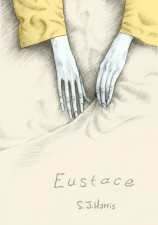 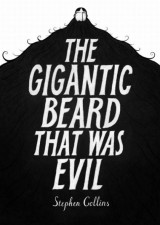 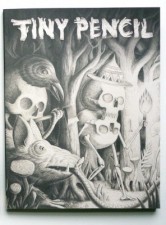 The idea of a long form comics work done entirely in pencil is rare but, purely by coincidence, it does appear as if ‘Eustace’ has emerged into a ‘graphite renaissance’, with Jonathan Cape also releasing the purely pencilled The Gigantic Beard That Was Evil by Stephen Collins around the same time and the recent debut of the graphite-only anthology Tiny Pencil [covered at BF here].

Steven chose to work only in pencil as he was intrigued by the possibilities for developing atmosphere with shade. He’d also hoped it would speed up his productivity but found himself spending so much time cleaning up his work that he feels he could have inked it in the same time! Another interesting creative choice is his development of different hand-written script for each character, giving them a ‘voice’ on the page using a very simple, but effective, technique.Given the array of typography Steven used in his time on Paper Cuts it does feel as if his time on H2G2 gave him a firm grounding in a number of methods that have proved invaluable in getting the book together.

People in the group pointed out that Asterios Polyp by David Mazzucchelli and The Endless in Neil Gaiman’s Sandman  also used the idea of developing a bespoke style of presentation for different characters (see example images of Asterios Polyp above and Sandman below). Once the book was underway Steven remarked that the editorial approach of Cape was very hands off and he was left to complete the work with a deadline but without the need for constant updates or scheduled work. The only fear that his editor shared was that the end of the book may turn out ‘silly’ but when Steven handed in the final draft his editor couldn’t even remember that being a concern! 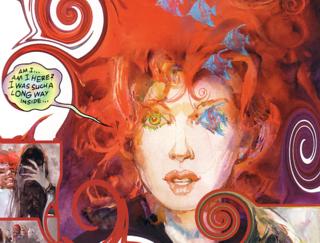 Before publication Steven went into a production meeting to discuss the formatting of the book. Steven wanted the book to be a hardback, similar in size and shape to a prose novel. He always envisioned the book at A5 and, despite having seen the art at A3 and enjoying the grain of the graphite being more predominant, that was the format that was agreed on. Cape presented Steven with a selection of paper to choose from and seemed bemused by his insistence on checking the paper for aroma as much as texture! 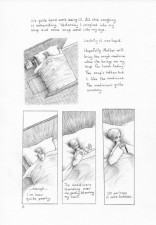 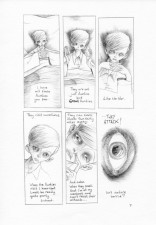 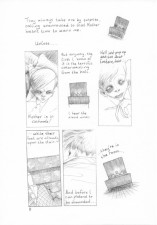 We then went on to talk to Steven about the creators whose work he enjoys now. He named Dave Cooper, Nina Bunjevac and Joff Winterhart among his favourites and cited Brian Bolland as an indirect influence on his work. Steven fielded some questions at the end, particularly on his method of building up and then breaking down the story. He explained that he would write the story out as a chunk of text and then break that into smaller pieces to lay out as a comic across the page. Again, this seems to echo with his process that developed from the work on H2G2, which was presented essentially as text which Steven has then ‘adapted’ into comics form.

Steven finally revealed that he has plans for a ‘Eustace Quartet’ that will follow the character across his life, revisiting at 20 year intervals. At the moment Steven plans to use slightly different visual techniques across the next two books and then have these styles meshed together in the final book as Eustace looks back across his life. 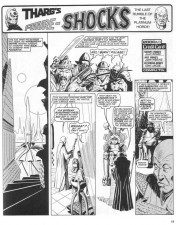 To close the evening we talked about a script that Karim Iskander Flint has written to be submitted to 2000AD. It’s a ‘Future Shock’ a short Sci-Fi story with a twist that has a long and proud tradition at 2000AD and is the only form of submission they will take. We discussed the value of working in the short form for creators, giving them attainable targets and the discipline to tell a story with limited space. Karim also talked about working with Kat Astner, the artist, particularly as they tried to pin down the ‘look’ of the characters and the setting.

The submissions section of the 2000AD website is highly recommended for anyone doing comics, long or short, Sci-Fi or general fiction, as they give a really strong grounding in the fundamentals. They are also useful for creators who are looking to see what editors want from their creators and give an insight into the specifics of submissions.

After a period of mingling in the shop we removed ourselves to the pub to continue the discussions. The more sensible among us left at a reasonable time but there have been strong rumours of a roof-top party nearby actually putting a lid on the evening…