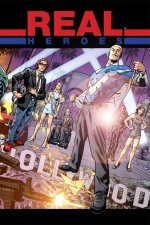 The celebrity stars of the blockbuster The Olympians films are about to take “method” to a whole new level. In Bryan Hitch’s all-new six-issue miniseries REAL HEROES, a group of actors who are used to playing superheroes on film are forced to don their capes and cowls in real life when a nefarious foe endangers their city.