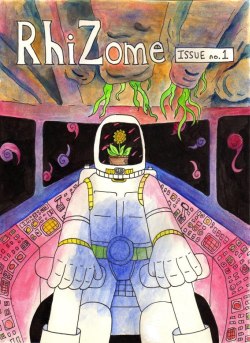 Rob Jackson and Kyle Baddeley-Read’s sci-fi anthology RhiZome is a conscious attempt to create a comic that hearkens back to an edgier time of experimental small press publishing, as noted in the text pages towards the back of this first issue. In that respect it’s partially successful with a raw energy to its interiors, disparate artistic styles and the intriguing inclusion of an interview with underground/alternative comics authority David Huxley. Its comics contents, however, are more traditional than that bold statement of intent would imply, largely falling into the 2000 AD Future Shock or EC science fiction mould of storytelling.

I am, and always have been, loathe to use the term “hit and miss” when reviewing anthologies. It always seems such a lazy fallback phrase to me; a lethargic critical response lacking in imagination or real insight. In RhiZome, though, we have a comic where I will probably come the closest I ever will to employing those dread three words in a review because, for all the enthusiasm of each and every creator involved, there is a noticeable gap in the levels of technical proficiency in the assorted collaborators.

Let’s hone in on the material I found strongest to begin with. I have reviewed a number of Rob Jackson’s comics in ‘Small Pressganged’ this year including California, The Storytellers and the recent A Handful of Groats and have become a big fan of his simple but always engaging presentational style. Slice-of-life, horror, Westerns… there doesn’t seem to be a genre that Jackson can’t turn his hand to, and ‘Corporation Pop’, his foray into sci-fi thriller in these pages, once again displays his ability to hook his audience. Kafka-esque overtones abound in this story of two near identical gentlemen called Dan Smith turning up for a new office job on the same day and the fractious relationship that evolves between them. Paranoid and unsettling, I look forward to seeing where this goes next in RhiZome #2. 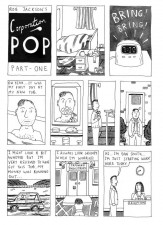 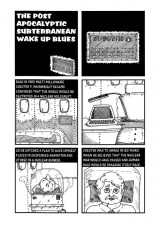 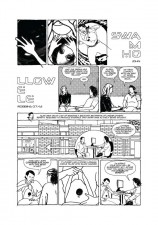 The issue’s most accomplished entry is, without a doubt, John Robbins’s ‘Swallow Me Hole’ which at first glance appears to be a neatly constructed tale of alien presences and body horror. But give this one a second reading because there’s something far cleverer going on here in this layered psychological offering that has more to say about dependency, vulnerability and wish-fulfilment than may be obvious immediately. I also loved the nostalgic evocation of my childhood Brit comics buying past that was evident in Pete Batchelor’s ‘The Post Apocalyptic Subterranean Wake Up Blues’ which follows a multi-millionaire who awakes from suspended animation having used his fortune to avoid a nuclear holocaust. It reminded me so much of the way in which early 2000 AD Future Shocks would take a sci-fi cliché and then subvert it to their own ends with that trademark black humour. 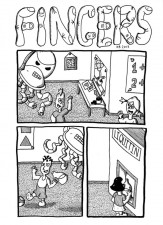 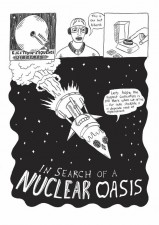 The other two stories herein – Max Mose’s short about a planet of warring lycanthropic creatures ‘In Search of a Nuclear Oasis’ and Kyle Baddeley-Read’s tale of the symbiotic relationship between a group of robots and the children they oversee in ‘Fingers’ – are less sophisticated than their stablemates. There are interesting ideas at the core of both but the storytelling lacks comparative clarity. Whereas Rob Jackson’s basic art style is made up for by his ability to structure a narrative these two tales don’t have that same level of precision in their presentation to compensate for the more naive visuals.

Unrefined it may be but there’s still promise in this first issue of RhiZome. It’s certainly more on the D.I.Y. culture side of the small press but I’m all for a little democracy in small and micro press publishing and with a second issue is in the works for early next year I’ll be keeping an eye out to see how Jackson and Baddeley-Read develop this project in 2014.

For more on RhiZome check out the tumblr here. You can buy a copy online priced £4.00 from Rob Jackson’s store on his site here.