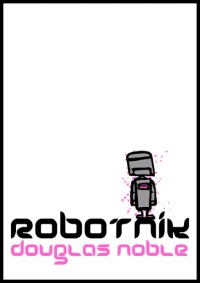 Douglas Noble’s Robotnik is a troubled little automaton. He has mechanical body issues. He’s waiting with some concern for the imminent robot revolution. Oh, and his infatuated pursuit of Gabriel Byrne – or Ms Gabriel Byrne as Robotnik insists on referring to the thesp in question – is constantly hampered by his machine-minded social faux pas. Life is never easy when you’re the unhappiest bag of bolts in town…

Robotnik is the creation of the same Douglas Noble who has brought us the likes of the chilling Sightings of Wallace Sendek, the sinister Built of Blood and Bricks, and the philosophical meanderings of Complex. Noble is one of the great boundary-pushing figures of the U.K. small press scene, relentlessly toying with the traditional graphic narrative form, and always willing to experiment with the canvas of the comics page. In turns his work can be almost gratifyingly disturbing, troublingly pensive and compellingly obscure. In short, he is a rare original and someone who produces comics that are, quite frankly, maddeningly underappreciated. 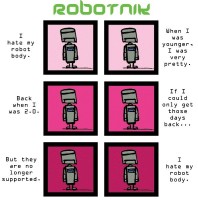 And now that I’ve built him up in that last paragraph I’m going to knock him back down again by stating that the joy of Robotnik is that he does none of those things in this eccentric little strip about a loner robot. Yes, it has that same dark humour we’ve come to expect from the man but Robotnik is, in many ways, his most traditional take on the medium; superficially it’s simply 52 one-page gag strips looking into the psyche of one rather unhinged mechanised being!

The strip was first published online a few years back at Douglas’s Strip For Me site and has now been published as a colour print collection. On re-reading it in that format I was most struck by just how clever his interweaving use of a number of recurring themes was. In fact, in Robotnik, Noble takes the idea of the running gag and exploits it to a degree that makes Marvel’s endless renumbering games look positively subdued in comparison. 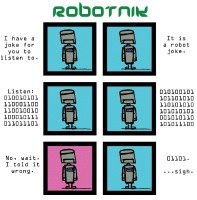 The strips on show here are all simply six-panel monologues. I will leave it to all of you out there to decide amongst yourselves whether Robotnik even technically qualifies as a comic because while the text may form a narrative the art is hardly sequential, consisting of the same repeated image in every frame. But, again, this is part of the joy of this deliciously ludicrous character’s world.

What we have here is the ultimate proof that repetition does, most assuredly, add comedic value, both visually and thematically. Noble’s constant revisitation of previous jokes is quite brilliantly structured in that it allows the humour to build a kind of knowing, self-referential pathos as the various threads of Robotnik eventually dovetail into a climax of sorts. 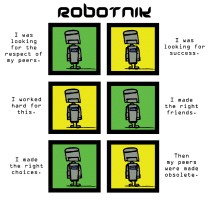 Morbidly witty and yet oddly poignant, Robotnik eschews Noble’s sometimes deliberately vague storytelling style for something atypically direct and obvious. Noble devotees may, perhaps, find this almost disappointingly accessible but there’s no denying the high comedy value of these sly and slightly rambling soliloquies. Read the first 15 pages for free here if you don’t believe me…

For more on Douglas Noble’s comics check out his Strip For Me site. Robotnik can be bought from his online store here.