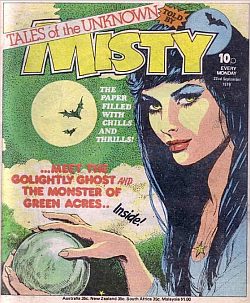 For fans of classic British comic weeklies the big news from yesterday’s day of Comica Festival Conversations at the British Library came from the ‘Draw Misty for Me’ panel. The event, celebrating the fondly remembered supernatural girls’ comic Misty from the late 1970s, had originally been intended as a three-way conversation between “the Godfather of British comics” Pat Mills, editor of Studies in Comics Dr. Julia Round, and renowned Misty artist Shirley Bellwood.

Unfortunately, due to illness, Shirley Bellwood was unable to attend (Misty devotees should keep an eye out on the Comica site for a rescheduled event later in the year) but the panel still offered a fascinating discussion of the cult favourite comic, from Round’s perspective as an academic and long-term fan to Mills giving a first hand account of his work on the early days of the weekly.

While material from contemporaries like 2000 AD and Battle continues to be collected, reprints from girls’ comics of the era are conspicuous by their absence. Potential collections of Misty, in particular, have had notable support from sections of online fandom, and there was an exclusive WHSmith compilation of strips a few years back. But the Best of Misty book from Titan, listed on Amazon in 2009, failed to materialise, and the closest thing we’ve seen to Misty merchandising to date since is this box of postcards. 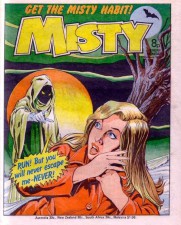 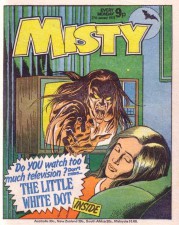 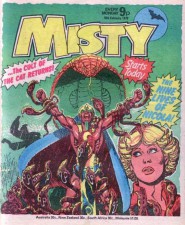 Yesterday we were given a tentative panel announcement, however, which brings hope to fans that some of this long neglected material may finally see its way to print next year for the first time in decades, outside of the aforementioned special. While few details were given at this stage (including the potential publisher), the mooted strips for publication are Mills’s own ‘Moonchild’ serial with art by John Armstrong, and  ‘The Four Faces of Eve’ by Malcolm Shaw and Brian Delaney. 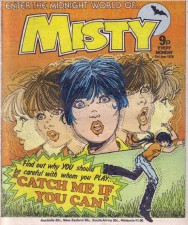 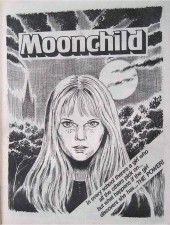 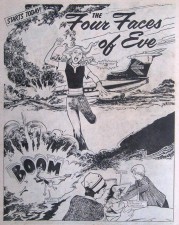 An exciting prospect indeed and one that, perhaps, also raises hope that one day other influential work from the vast archives of UK comics may eventually see the light of day again. In that regard the Comics Unmasked exhibition most assuredly underlined the breadth of UK weekly comics material that has been unforgivably forgotten. From Misty to controversial ‘70s boys’ comic Action, through to the brilliant imagination of Ken Reid, the wealth of possible candidates for collection is breathtaking…

For more on Misty visit the fan site here. You can read more on Pat Mills’s thoughts on the comic on his blog here. For details on Comica events check out the site here.