Sourya is a French-Laotian manga artist who lives and works in Paris. The first volume of his ongoing fantasy series Talli: Daughter of the Moon arrived in stores on October 26, 2022, published by Oni Press and translated by the cartoonist François Vigneault (TITAN). In honor of the release of the first volume of Talli, Sourya and François discussed the author’s creative process, manga versus bandes dessinées, the challenges of creating a fantasy world, and Sourya’s feelings about finally seeing his work in English. 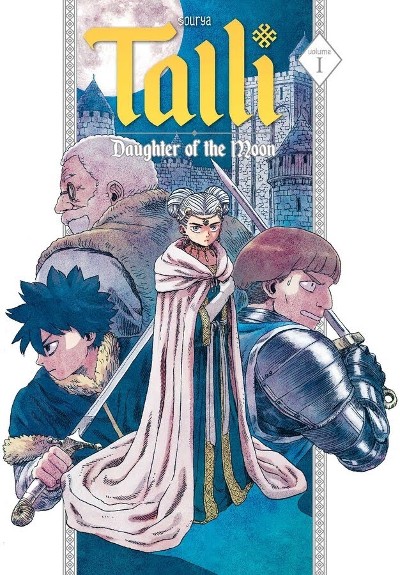 François Vigneault: Hey Sourya! It’s funny because I feel like I already know you, having worked on translating your book Talli: Daughter of the Moon Volume One, but we’ve never actually met! So it’s nice to be chatting with you, finally!

Sourya: Hello François! Thank you for your questions 🙂 I’m glad we get to talk about our mutual passion, comics and manga!

FV: Can you tell us a little about your background?

Sourya: I grew up in Laos until I was 15 years old. I would draw ALL the time, with my brother. Not just random drawings, they were already manga pages. I would come back home after school, do my homework, and draw until 1:00 AM.

Then I went to France for high school, got a “Baccalauréat Scientifique,” which is like, a science major (hated it). I then went to animation school for a few years, where I could finally draw as much as I wanted. Once I graduated, I got contacted by Ankama Editions to work on a comic book called Rouge, and that was my first step into the comic book industry. I worked with Ankama on several projects before signing my own series, Talli. 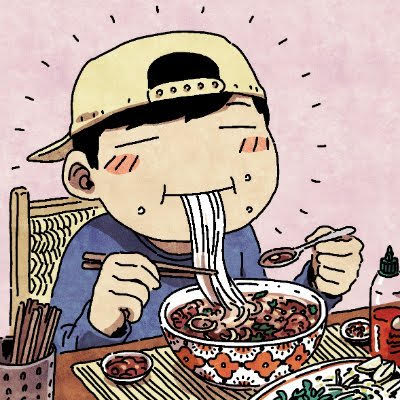 FV: Do you consider yourself to be a manga artist, a comic book creator, or something else entirely? Do you feel like there is a significant difference between Japanese manga, French bandes dessinées, and American comics? If so, how do you manage those differences in your own work?

Sourya: I consider myself a manga artist, in the sense that the final product looks like a manga (in my opinion). There are a few differences between BD, manga, and American comics:

I have always read and drawn manga since I was a teen, so it came pretty naturally to me to work on that kind of format. 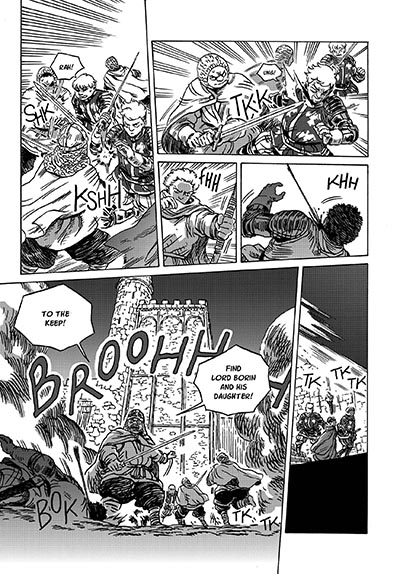 FV: Where did your creative process start for Talli? With the characters, the plot, the world, or something else?

Sourya: The root of Talli, what was important to me at first, was to create a journey, to have that feeling of traveling, with strangers that would become a family at the end of the adventure. I would then build my story around that feeling.

I first created Talli, the main character. I had a pretty good idea of what I wanted her to look like, physically, but also her personality. I then had to find the plot. One part that was difficult for me to find was to figure out “What is her power?” That went hand in hand with the creation of the lore of the world. Creating a fantasy world isn’t easy for me, especially because you’re basically allowed to create anything you want. I tried to keep it as simple as possible, to focus on the plot, and less on extensive lore. 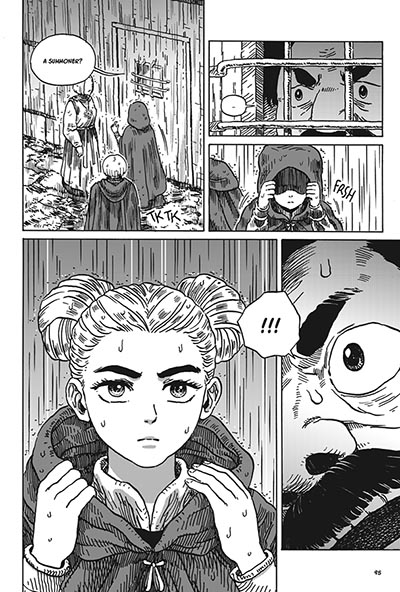 FV: Three volumes of Talli have been published in France, and the series has already been translated into Swedish and Spanish. Now I’m delighted to say the series is finally appearing in English. How do you feel about Talli and her companions making their way to America? Were there any English-language comics, films, or video games that had an influence on your development as an artist?

Sourya: I feel so excited and grateful that Talli is finally getting an English edition. It means a lot more people are going to be able to read my manga: English-speaking countries of course, but also, well, basically all around the globe. So it’s a huge step for Talli. And hopefully, readers in America will enjoy her story!

A LOT of American movies influenced me as an artist. I have loved watching movies since I was a kid, my father would always buy new movies on DVD. Some of my favorite films: The Sound of Music, Schindler’s List, Pride and Prejudice, The Godfather… All of them inspired me as an artist. 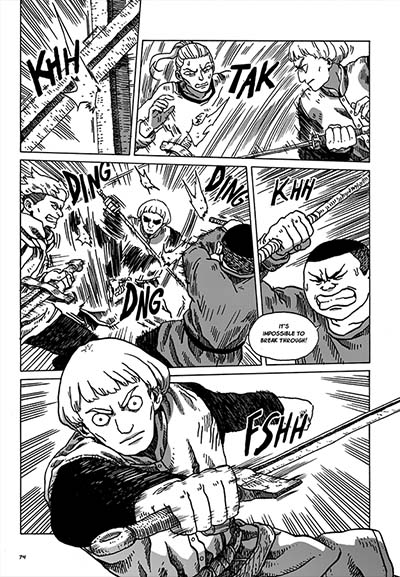 FV: One thing readers are sure to notice right away is that the action in Talli is intense and dynamic, with brutal sword fights and chase sequences. What’s your secret for drawing action on the comics page?

Sourya: Since I don’t have many volumes and many pages to tell my story, I have to keep the fight scenes simple, and get to the point efficiently. They always have to serve a purpose: To give some information to the readers, or to progress in the story. The drawings don’t have to be complicated, as long as the storyboard makes the action scenes flow. For me, it is the most important part.

FV: Unlike a lot of fantasy manga and games, the world of Talli feels quite grounded in some ways… The heroes and villains are human beings, and there aren’t monsters and magic around every corner. For me that makes the moments when something magical does happen that much more impactful (and even frightening). What made you choose to build a “low magic” universe for your story, and how does that decision affect the way you tell the story?

Sourya: As I was explaining before, creating a fantasy world seemed quite difficult for me. Which is why I decided to put limitations on world-building. Having limitations actually helps with creativity, at least for me it does.

Having to work out the powers of the summoners was already a huge deal for me to write about. I thought it wasn’t necessary to create a lot more. For example, there aren’t different races, or more magical powers… Not only did it make the writing process easier for me, but it also felt like I was creating something more personal in a way. And also, I love medieval-era aesthetics, so I felt like there wasn’t that much more to add. 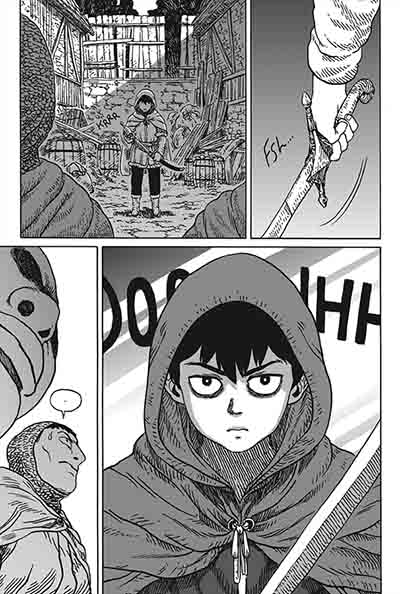 FV: Speaking of magic, the adolescent protagonist Talli has some very powerful magical abilities, but she struggles to control them. What made you want to explore that theme?

Sourya: I liked the whole idea of having to travel because of being chased. It would make the journey that much more exciting. So then I had to find the reason for that chase… Talli had to be someone precious, rare… Giving her powerful magical abilities seemed to be interesting. Her powers would be the door to writing a fantasy story. I also liked the fact that she doesn’t know how to fight. She is the only character in the group who doesn’t know how to handle a sword. So her summoning powers would balance everything out, even though she doesn’t know how to control them at first. And there is a price to use them as well… Otherwise, she would be way too powerful! 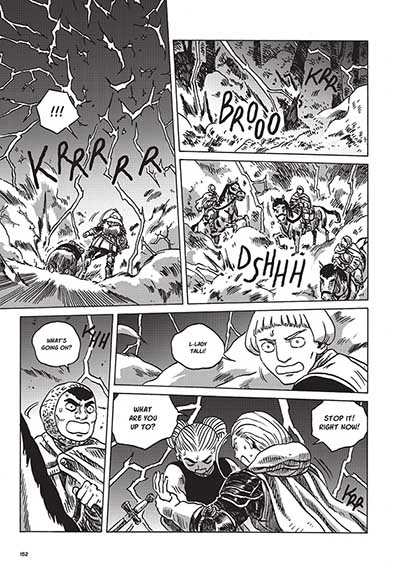 FV: Princess Talli and her motley crew of companions (including the overly-earnest knight Alan, the sleepy rogue Lélo, and the jolly “adventurer” Pavel) have really fun personalities, and there is a lot of enjoyment for the reader in just watching them ping off of each other… They get frustrated, bicker, and tease each other, but you can tell that the bonds of a deep friendship are definitely building. How do you approach writing your characters and their relationships? What is your favorite character pairing to write?

Sourya: Thank you for saying that François! I always create my characters as a group. I never think of them as individual personalities. I ask myself:

How can I create contrast?

How is he or she different (personality wise, but physically as well)?

How can their conversation be interesting ?

Which is the whole point for me, to make them different, to have interesting dialogue—since they never think alike, each reply would create tension.

My favorite pairing is, of course, Talli and Lélo (spoilers). Sometimes, I even feel like their relationship is what drives me the most to continue the series. My romantic side is just too strong, I can’t do anything about it! 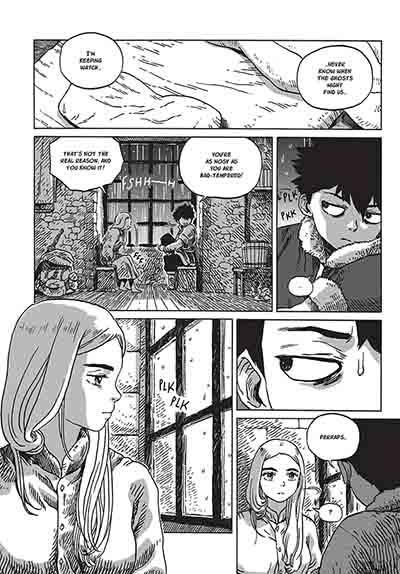 FV: One thing I have heard from a lot of readers is that once they finish Talli Volume One they immediately want to read the next book in the adventure. I’m very lucky to have gotten to read the next two volumes of Talli already and I can definitely say that the story takes some awesome twists and turns! I’m really looking forward to translating these books and for them to be available to English-language readers… Happily they won’t have to wait long, American readers can expect a new volume of this series every year like clockwork. Without any spoilers, what are you most excited for readers to discover in future volumes of Talli: Daughter of the Moon?

Sourya: Thank you so much François. I’m most excited for readers to discover how the characters will bond, and how they’ll become a family. Their relationships are something special to me, they’re like my children. I want the readers to see how they grow, how they are going to evolve together. And maybe… What the characters learn about themselves on their adventure, the readers will be able to relate to it, too. 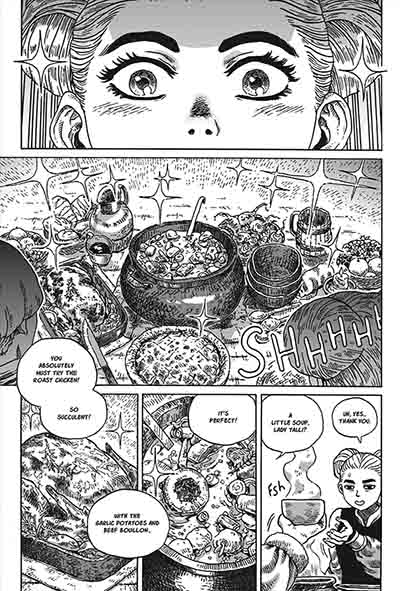 More details on the book here:

Talli: Daughter of the Moon Volume One

Talli is a Summoner: a nearly extinct people, hunted by those who fear their mysterious powers. As a baby, she was adopted by Lord Borin, and all was well for many years… But one day, their castle is sacked by Borin’s rival, Lord Ulric. Talli escapes in the chaos and darkness with the help of the noble (some might say too noble) knight Sir Alan.

With Ulric’s forces hot on her heels, Talli and Alan keep one step ahead, gathering a motley crew of companions and protectors that includes the lethargic-but-incredible swordsman Lélo. Ulric’s ruthless Captain Nina pursues them doggedly because she is aware of the secret of Talli’s blood: the secret of the Summoners!

Talli, Daughter of The Moon is an incredibly epic adventure from French-Laotian cartoonist Sourya that evokes the best of manga and bandes dessinées in one sweeping narrative.