Disjointed but skillfully crafted, incoherent but not amateurish, The Auteur has plenty of style but lacks any recognizable substance.

There are some comics that exude an aura of careful creation, that practically jump off the page and tell you that their creators put an immense amount of proverbial blood, sweat, and tears into them.

They might have slaved away at this project for years, working on the concept and poring over the fine details to make everything just right, tweaked just so, to bring every element together to form an edgy, dare I say revolutionary milestone in the history of comics.

Sometimes they succeed, and the work pays off. And sometimes, the greatness the creators had in mind doesn’t translate to a quality perceived by the reader. Whatever great concept or inspired story idea may have sparked its creation, the comic is fatally flawed in its execution, and no edginess, no off-the-wall zaniness can save it.

The Auteur, unfortunately, is that second kind of comic.

Now, let’s clarify that – it isn’t that this is a bad comic. Rick Spears’ dialogue is clever and James Callahan’s art is (mostly) great; even the lettering – by Spears, again – makes use of some very creative and original techniques. But nothing clicks together to tell a story.

Thanks to some infodumping television reporters, it’s clear enough what the premise is: once-legendary film producer Nathan T. Rex has fallen on hard times, his latest big-dollar film having flopped spectacularly. Out to redeem himself, Nathan has set his sights on a new project, hoping to revitalize the horror genre – and his career – with a film driven by practical effects, delivering an absurdist take on slasher tropes. 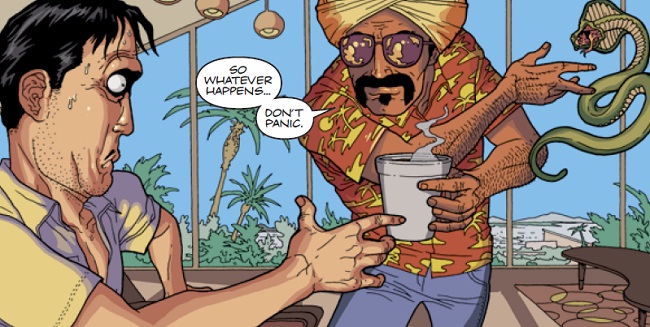 Beyond that, though, it’s often hard to tell what’s going on. Nathan has some on-set conflicts with the director of his horror picture; he has some meetings with stereotyped fat-cat Hollywood executives; and he winds up going violently nuts on the set of his new film.

At least, I think that’s what happened. But there’s no clear beginning and end here, and it’s not always possible to figure out how the various scenes relate to each other chronologically.

It might be important to underscore here that I could be reading this comic all wrong. Maybe I glossed over important details that help to make sense of the story. A second reading didn’t help, though, and left me just as confused as I had been after the first reading. Your mileage, as always, may vary.

In an afterword, editor Charlie Chu addresses the question of just what it is that makes The Auteur so great. The answer he comes up with is that, “It’s like no other book on the stands.”

He certainly is right there – The Auteur is as unique as they come. But that doesn’t make it good.