By now it’s pretty clear that those Mayans got it wrong. The world didn’t explode on December 21, 2012. But that doesn’t mean humanity is completely out of harm’s way, at least not if we have to believe the people of Safe Haven, a group of survivalists living in a self-created bunkered out society because they’re adamant that the end of the world is right around the corner.

Thus reads the premise of Sheltered, a new Image Comics series debuting in July concoted by Ed Brisson, who recently penned the Image time travel mini Comeback. That this story deals with “preppers” – as Brisson refers to the people preparing for global doom – in their set-up community immediately forms the reason why you shouldn’t think this is a lightweight version of The Walking Dead. Also: no zombies, but there will be blood…

ED BRISSON: In The Walking Dead, the group is always on the move, trying to find a place to settle and constantly dealing with outside threats such as zombies and rival groups. The group in Sheltered is dealing primarily with internal threats – aside from the looming end-of-world situation – and never moves around. They literally have a place to bunker down, so are not in want of anything to help them survive. They have it all. In Sheltered, the children have been trained their entire lives with how to cope with these situations, so when they happen, they are not caught unaware – unlike TWD, where survivors have to learn after the fact.

Something that both books share though is the group dynamics. Sheltered is very much about how the group works together, how those relationships are exploited, and how people cope with knowing that their lives could end at any moment.

What’s intriguing is that while this is a story about survival, it’s billed as a “pre-apocalyptic story” instead of post-apocalyptic. Why is that?

BRISSON: Because the world as we know it still exists. Just because this group of survivalists believes that it’s ending or that there’ll be an event that wipes out most of the global population, does not mean that the rest of the world feels the same. So, for everyone outside of this group, life is normal. This group believes that it’s got the inside track on this sort of information and is acting accordingly.

It’s all about what comes before the end. It’s about how this group copes with knowing that the world as they know it is about to end and what they do with the knowledge that they can’t all survive.

Even though you don’t want to reveal what the potential end-of-world threat is exactly, is it something that only few people are aware of, or is it common knowledge that the vast majority of humanity chooses to ignore?

BRISSON: I won’t reveal what it is, but it’s something that not many people seem to know about – it’s something I didn’t know about before starting my research. The threat is a very real one and something that man has zero control over. Prepper communities are very aware of it, although it’s not often seen as an immediate threat – unlike nuclear war or economic collapse.

We’re running essays in the back of each issue – exclusive to the single issues – about different end-of-world possibilities. So, readers will also be getting a bit of an insight onto a wide assortment of potential threats that most preppers are readying themselves against.

The cover to issue one shows a striking image of Lucas, one of your two key protagonists, standing in a pile of blood and with a splash of blood on his face. He comes across as a man using violence to be in charge, but also as a tormented individual. Is that correct? 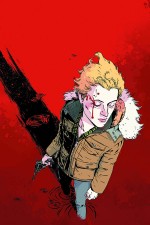 BRISSON: Yes and no. He does use violence, but is not necessarily a violent person. He’s practical. Everything that he does is for a reason. The violent acts that he commits aren’t out of malice, but strictly a means to ensure the survival of those around him.

As for torment…yeah. You can’t do the things that Lucas does and not be affected by it. The impact of his actions, both on himself and others, is something that is going to be explored pretty heavily within the book.

When issue one wraps, we don’t yet know what really drove Lucas to undertake the actions he did, except that he thinks he does it for the greater purpose. Is this a part of the mystery of the book that will take some time to unveil?

BRISSON: After the first few issues, it’ll be clear why Lucas and co. did what they did. I didn’t want to front-load the book with an explanation, for reasons that will become clear in the second issue. Not everyone knows why what is happening IS happening, so I want to let the reader discover much of it along side some of the characters.

The counterweight to Lucas is Victoria, who’s a relative newcomer to Safe Haven. She also seems to have a real sense of responsibility. How does she get involved in the conflict and become Lucas’s main opponent?

BRISSON: Victoria is a recent arrival to Safe Haven and didn’t grow up in a survivalist environment. This is something new for her father and not something that she is at all interested in. Through her, we get a bit of an outsider’s perspective on Safe Haven and what life there is like. She also brings a completely different perspective to things, within the group, and as a result presents some pretty serious challenges for Lucas.

Can you see your readership divided between who to root for, so to speak, Lucas or Victoria?

BRISSON: Absolutely. I know who they’ll be rooting for an why, but the one thing that I’m really trying to push in writing this is that both Lucas and Victoria are doing what they think is the RIGHT thing – and from the point of view of each character, they are. There’s not a clear cut villain or hero. Both are just fighting for survival – unfortunately, only one can have their way. 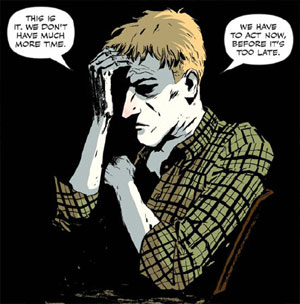 This is very much a coming-of-age story for both of them then.

BRISSON: It is. They’re both very much thrust into parental roles, but find themselves on opposite ends, fighting for what they think is right for the rest of the children.  Lucas, in a sense, has been carrying this burden of responsibility on his shoulders for his entire life. He’s been trained to think that he’s responsible for the survival of those around him – and in a sense, humanity.

Victoria, on the other hand, not so much. She’s happy being a teenager (although she’s not happy about being in Safe Haven), so this world is all new to her. Everything that happens is completely insane and horrific to her and her single goal is to survive and get out of Safe Haven, but she finds herself in a position where she’s now responsible for the safety of others.

Did your reteaming with artist Johnnie Christmas follow organically out of your previous collaboration with him on your crime noir anthology series, Murder Book?

BRISSON: Johnnie and I have been wanting to work on something together for about 4 years. We used to have studios down the hall from one another in the same building here in Vancouver and would often pop in to see what the other was working on. We had been working on a project about 3 years ago, but that didn’t manage to land anywhere. Then we did two short Murder Book stories together before I did Comeback with Michael Walsh. After getting that book picked up, Johnnie and I decided to try our hand at pitching, hoping that I’d be able to get another book in with Image. And from there: Sheltered.

It’s always been a really mellow collaboration. We’re generally on the same page and still manage to challenge each other.

How do you challenge each other while working on the book?

BRISSON: When Johnnie reads the scripts, he’ll often shoot me notes about scenes that he thinks maybe don’t work as well as they could or things that he thinks need a little push. He’s also very complimentary on stuff he likes, but isn’t going to let me sleep on anything. Vice versa, we confer on the art at all stages (thumbs, pencils, inks) and work out anything that might need tweaking – we essentially act as each other’s editor. 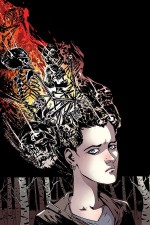 It’s a pretty easy process though and neither of us really balk at comments. We’re both focused on making the book the absolute best that it can be.

Something that also struck me about this book is its tight color palette, with mainly (cold) blue tones and a little bit of orange here and there for contrast. How does the coloring add to the atmosphere you wanted to create?

BRISSON: I wanted to set Sheltered in the winter to really push the isolation of this society. Both physically and ideologically, they’re cut off from the rest of society. The snow makes that physical separation that much more daunting. Shari Chankhamma’s winter colors really push that idea. You really get a sense of these people being alone. The kids themselves have these cherub-like rosy cheeks (due to the cold) that I think makes the things that they do seem just that much more sinister.

Sheltered #1 goes on sale July 10, 2013. You can find more cool stuff on this series on Sheltered’s tumblr.