When their lives and families are tragically stolen, six special orphans use their wits and teamwork to avenge their loss in this 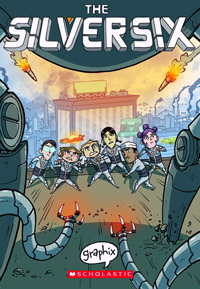 Kids are smarter than we think. It’s an old adage but like all good folk sayings, tried and true. Often we forget this universal truth, underestimating our children’s capacity for simple osmosis, not to mention logical deduction. In The Silver Six, A.J. Lieberman and Darren Rawlings create an extremely accessible family-friendly adventure that encourages readers to embrace teamwork, diversity, and creativity as strong and admirable qualities.

Indeed, using a light touch, Lieberman prescribes a lesson of tolerance and open-mindedness throughout the book, introducing an eclectic group of young heroes with distinct personalities who bond with one another, when they discover their parents were all killed in the same tragic shuttle accident. While it all seems very tame and politically correct on the surface, Lieberman balances accessibility with thoughtful craftsmanship very well. Eschewing the hammer, he uses dialogue and character development to promote his themes. Honesty, tolerance, and imagination – so often absent in many so-called all-ages stories – here take center stage under Lieberman’s watchful eye. Always driving the action with ingenuity and flare, it never feels as if Lieberman’s sermonizing or teaching his audience a lesson.

Darren Rawlings brings a similar balanced approach to the artwork. Utilizing an easy-on-the-eyes, cartoonish style, Rawlings excels at ushering the audience into the sci-fi milieu of The Silver Six. Set in a futuristic society dependent on a sole fuel source for virtually all facets of their lives, this is a story that requires thoughtful consideration of all aspects of an existence. Rawlings capitalizes on the smart use of establishing shots and consistent yet distinctive designs to pack his panels to bursting with fictional verisimilitude. Every probe and shuttle and skyscraper makes perfect sense functionally, as does the rogue moon our heroes adopt as their new home.

It’s this attention to detail in script and art that catapults The Silver Six into the upper echelons of all-ages comics. By investing thought, craft, and passion into their project, Lieberman and Rawlings will hopefully engender the same ethics in their target audience. Although recommended for children in Grades 3-7, The Silver Six (with a little help from the parental units, of course) is great fun for kids of all ages – even the adult ones.