There is no gung-ho heroism in the pages of Uber; actions are borne from jaded pragmatism rather than any unrealistic sense of pure honour or ethical superiority. In that regard, Gillen shatters the complacency of the moral structure that such stories normally encompass.

The dying days of World War II and, as the allied forces move in on Berlin, history is about to take a very different turn from the path that we are familiar with. Because in this take on reality those last, desperate moments of the conflict will see a new factor added into the mix – Nazi super-beings who will extend the hostilities far beyond their supposedly fated endpoint and plunge Europe into an all-new “third act” in this bitterly fought campaign… 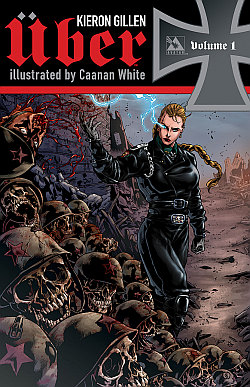 The crucial turning point in Űber that sees the flow of history diverted comes just as the Nazi forces are facing final defeat. With Hitler on the brink of suicide, communication from an agent deep undercover in the German “Overman” research project reveals that the war is about to begin a horrifying new phase as terrifying human weapons – the “rank and file” ubers the Panzermensch, and a handful of their “Battleship” class cousins – enter the fray. With the super-soldiers devastating all in their path in continental Europe, a last gasp race begins as the Allies attempt to create their own enhanced super-being before they are overrun…

If the back cover text on the trade collection of writer Kieron Gillen and artist Caanan White’s Űber is to be believed then this first collection of the Avatar Press ongoing series promises a take on the comics “super-soldier” idea unlike anything we have experienced before. That’s a bold claim that, unsurprisingly, is somewhat hyperbolic in delivery and Űber – by the point the six issues in this compilation have concluded anyway – proves to be more or less another permutation on an old super-hero comics theme. But, while the comic is perhaps not the brave new re-imagining the publicity blurb proclaims, it is a darkly fascinating approach to the idea of superhumans as part of the war machine that takes the concept to its logical, cynical conclusion.

That’s largely because Űber never makes accommodations in its portrayal of the moral complexities of war. It’s not so much a reminder of that oft-repeated mantra of a certain tradition of comics that “war is hell” as it is a weary testament to the inescapable and obvious observation that war is moral compromise. To underline this Gillen puts the reader in the uncomfortable situation of reading about protagonists who are largely unsympathetic – there are characters here whose plight we can empathise and yet we still faintly despise them for the choices they make. There is no gung-ho heroism in these pages; actions are borne from jaded pragmatism rather than any unrealistic sense of pure honour or ethical superiority. In that regard Gillen shatters the complacency of the moral structure that such stories normally encompass, that fragile facade that we usually construct for ourselves when we live out our convictions through the eyes of such characters. The right thing is an irrelevance because there is no right thing; only moral concession. 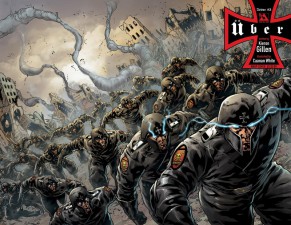 This is an Avatar book and, as such, you will be unsurprised to note that Űber has its fair share of the signature Avatar over-the-top blood and guts moments! As with much of the publisher’s output you quickly become desensitised to the exploding body parts and the sense of shock and awe that those scenes are presumably designed to elicit. No doubt readers will be divided then as to whether Caanan White’s explicit visuals are a defiant depiction of the appalling reality of the battlefield or simply voyeuristic sensationalism. Outside of the sometimes gratuitous dismemberments and melting faces, though, White brings home a forceful sense of displacement and despair in his unwavering portrayal of the devastation of warfare on the environment and the populace.

With a denouement in this first volume that casually reflects the fatalism of the rest of the book, Űber is a compelling and unsettling collection that will appeal to a broader section of readers than the usual core Avatar audience. Gillen isn’t particularly interested in the notion of the super-soldier as embodiment of an ideal or as symbol of propaganda. This is super-powers as weapons first and foremost; an exploration of the super-being as a strategic tool rather than as a PR exercise, or a rallying call to arms. It’s brutal and it makes no allowances in its depiction of the actualities of amoral expediency over the plight of the individual in warfare. Meticulously researched, Űber takes an era of actual historical violence that we can already barely comprehend and ramps it up a hundredfold with a stark and intelligent commentary on the unidealistic realities of waging war.