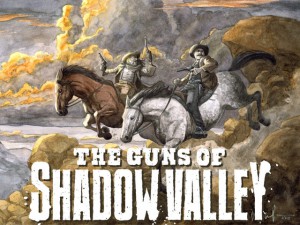 Dave Wachter and Jim Clark are comic creators and Wild West aficionados. Starting their comic book “The Guns of Shadow Valley” in a traditional format five years ago, they could not land a publishing deal, so they began a webcomic instead in the summer of 2009.

Since this humble beginning, they have had a large following of thousands of readers per week, over 100 pages of story, and nominations for Eisner and Harvey awards for excellence in digital publishing.

Then, everything came to a screeching halt.

“I’ve loved working full time with IDW and Dark Horse comics, but the paying gigs kept me from my dream project. It’s the one that I was really wanting to make a reality,” said Wachter.

So, the two decided to bring the story full circle by finishing the epic tale with an oversized, hardcover edition of The Guns of Shadow Valley.

“We have everything else in place, now we just need the financial resources necessary to complete the project,” said Wachter. “We are turning to Kickstarter and comic fans across the world for help.”

Kickstarter is a crowdfunding site where inbriduals can invest in projects they feel are worthwhile. The Guns of Shadow Valley campaign will kick off on June 14th and end on July 15th. The goal is $24,000 which will complete the second half of the comic storyline, print the entire story as a hardcover book, and throw in lots of extra incentives.

“For us, this is our opportunity to finish what we started. Our readers have been begging us to start it up again,” said Clark.

Readers can pre-order a signed and numbered copy of the hardcover edition for $30, and there additional benefits and rewards, such as T-shirts, original paintings, and even cameo appearances in the story.

“If you can imagine ‘X-Men meets The Magnificent Seven’, then you have a good idea of The Guns of Shadow Valley and its theme,” said Clark.

Interested parties can visit the Kickstarter page at www.gunsofshadowvalley.com/kickstarter to learn more about the plans for the project and pre-order the book.

“We can’t wait to show everyone how this ends,” said Wachter.