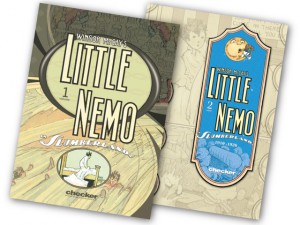 The masterpiece works of Winsor McCay LITTLE NEMO IN SLUMBERLAND will be collected in two affordable editions and the Publisher announces that due to personal health issues the previous funding project was cancelled, but has now been relaunched with an extended running time.

Thanks to the savvy comics aficionados backers bookmarks, litho´s and even wraparound t-shirts now will be available… IF fans of landmark comic book artwork will join hands and make this project a reality. Fans need to remind themselves that this will be with source files which are the Checker files which have been painstakingly restored. This being early 1900’s material, the word balloons were hand lettered prior to current lettering standards and methods being in place in the industry.

Winsor McCay was an unparalleled genius who spawned an entire sub-culture that  grew into something that now pervades the worldwide culture of comic books and cartoons.

What began as a labor of love as a comic fan will soon be a limited edition collection of the entire run of Little Nemo in Slumberland. This new set of softcover editions represents a collection never equalled before or since in its comprehensiveness.

Two  large format soft covers which encompass the entire run of Little Nemo in the first part of the 20th century including the short lived return  of the strip in the late teens and twenties.

Included here is every known episode from October 13th, 1905, the very first, until August 15, 1909, never before published in complete collected form.

In addition, another first: All forty-three episodes of McCay’s first color Sunday feature, Tales of the Jungle Imps, As published in the Cincinnati Enquirer in 1903.

Bonus promotional material includes playbills, posters, Little Nemo merchandise pics  and more. This is the most comprehensive collection ever of the material.

Be sure to join in on the limited rewards while the Kickstarter lasts until April 13, 2014.