THOUGHT BUBBLE 2022! “In September 2020 I had an affair with next door’s cat”… That’s an opening sentence in one of the strips in Rebecca K. Jones’s Alfcat that is both beautifully irreverent in its wit and so perceptively indicative of the way in which cat lovers anthropomorphise their feline pals. Alfcat is the story of Jones and her partner Peter Morey’s decision to adopt a cat during the lockdown days of 2020 from the often laborious process of applying to various charities for approval to the stressful early days of attempting to bond with this often willfully unpredictable new “family member” named Alf. 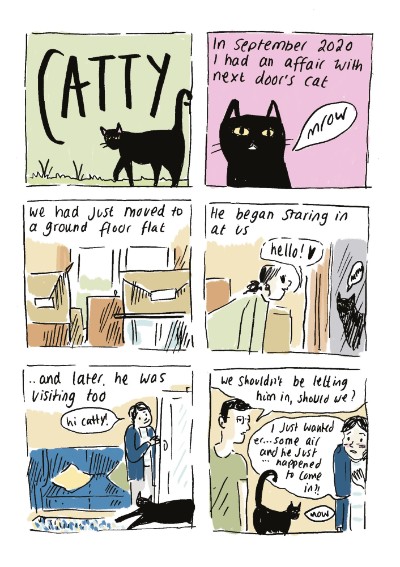 What’s so subtly clever about Alfcat is the way in which Jones draws us into the emotional highs and lows, the insecurities, and the fears of the duo’s experiences. In terms of narrative this is a very straightforward account but Jones has a knack for ensuring we are fully empathetic with the stresses and concerns its protagonists feel throughout, from the seemingly over-zealous bureaucracy of appeasing the charities concerned  (“I swear it’d be easier to have an actual baby than adopt a cat”) to Alf’s constant urinating around their flat and his initial ambivalence to their presence. 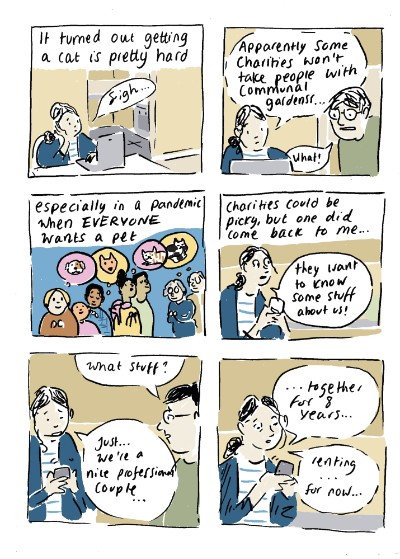 Jones’ style here visually is perhaps looser than in some of her previous work but it suits the immediacy of the autobiographical material, bringing us into the moment and feeling particularly appropriate for the anecdotal vignettes that make up Alfcat. Pacing is excellent throughout with key moments in the story being presented in one-panel pages. Jones chooses not to use full-page illustrations but rather places a single normal sized panel in the centre of the page, the all-encompassing white space around it emphasising the tone of the scene all the more for it floating in an expanse of blank space. It’s a technique that is all the more intense in a scene where Rebecca and Morey first let Alf out into the communal gardens and worryingly await his return. 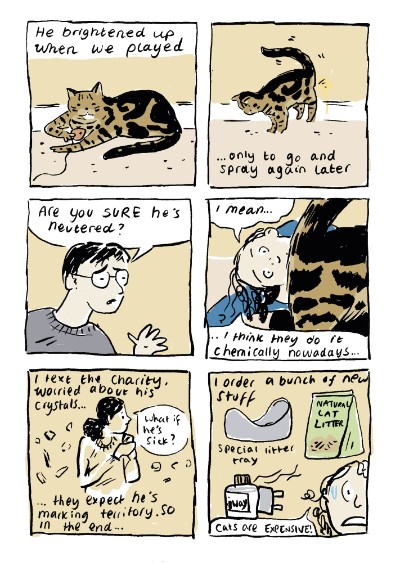 Life-changing events don’t necessarily have to be either unexpectedly fortuitous or catastrophic in nature for them to change our circumstances in significant ways. With its gentle observational humour Alfcat is a fine example of this. If you’re looking for a charming and sweet piece of diverting comics fare at Thought Bubble this weekend then this is absolutely the comic for you.

Rebecca K. Jones is at Table 137 in the ComiXology Hall at Thought Bubble 2022