THOUGHT BUBBLE 2022! Multimedia comics allow us an opportunity to think about how we interpret and interact with the form, giving us extra levels on which to appreciate narrative and connect with the page. Comics with musical accompaniment are not a new thing to our coverage here at Broken Frontier; the abstract comics work of Miranda Smart and Ravi Thornton’s The Tale of Brin and Bent, and Minno Marylebone spring immediately to mind in that regard. Morgan Mei’s April’s Chop to the Top was originally created as part of an Original Character Tournament collaborative art competition (which I’m informed is where creators enter their own original characters into a story and “face off against other artists”!) and features original music and storyboards to supplement the action. Those with longer memories will remember I reviewed the artist’s award-nominated My Husband is a Cultist here at BF a few years back. 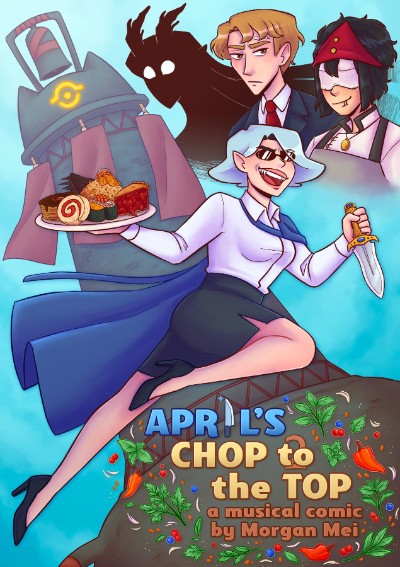 April’s Chop to the Top is the story of the titular April Blood whose failed attempts to despatch her husband lead her to the mythical Tower of Gobble where the treasure of the demonic Dyet is stored. To reach her goal, though, she must first face the tower’s guardians and gain safe passage by satiating them with delicious meals. Along the way she meets a variety of different allies and antagonists including the oddball salesman Mr. Sauce, a weaponised giant crab, blind and armless warrior Asura, Ducky of the Ducktectives detective agency, and many more…

At signified points in this graphic novel the reader is directed to YouTube urls where the songs (music and lyrics written and performed by Mei!) that go along with the action are located. Those not wishing to do so will not miss out as the storyboards and lyrics are presented as comic strips within April’s Chop to the Top. It’s a fun sidestep that, after the first instance, certainly informs how we view the protagonist and how we subsequently interact with the page. 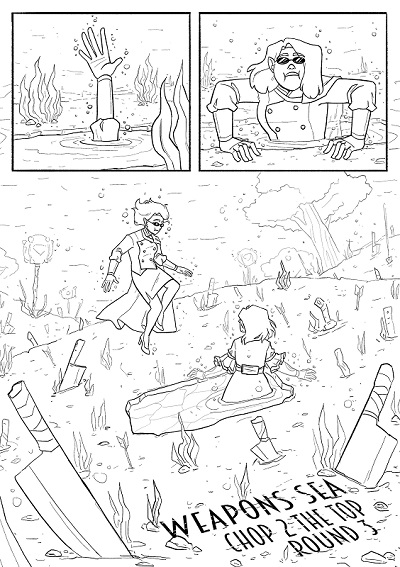 While the story initially suffers a little from not elaborating more on April’s relationship with her husband there are revelations along the way that take things in whole new tangents, with a number of twists and turns fleshing out the world created here and adding extra context. Mei’s clean line has an accessible quality and their jaunty visual characterisation ensures the sprawling cast of characters never becomes too overwhelming. Action sequences, in particular, have a real sense of energy and motion. 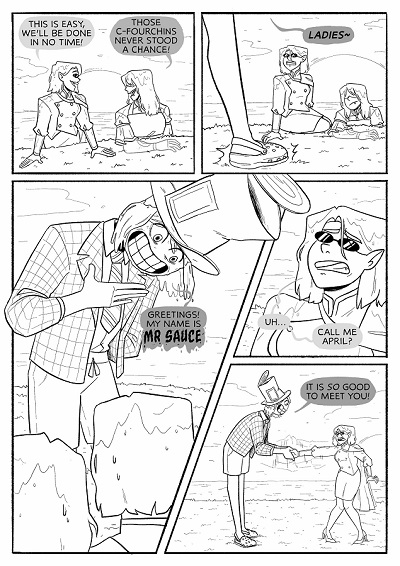 Back matter explains more about the origins of April’s Chop to the Top and the other original characters who journey through these pages. Despite the niche nature of its genesis this still feels self-contained in presentation. Most of all, though, it’s simply pure fun! The musical digressions proving to be a novelty that does not outstay its welcome. Light-hearted but with more than a hint of dark humour along the way April’s Chop to the Top is the kind of escapist fare that feels most welcome in these bleak times.