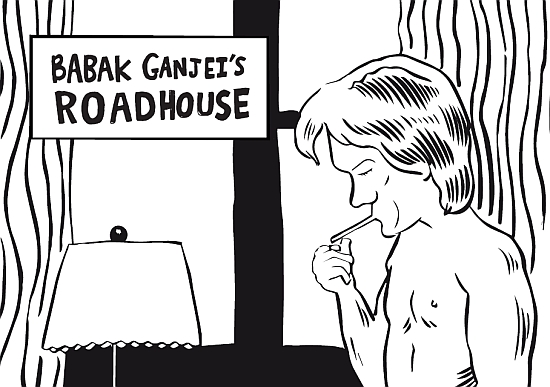 Deconstructing an ‘80s Patrick Swayze movie in graphic novel form is an exercise in comics making that sounds so obscure that it couldn’t even aspire to reaching a niche audience. But that’s just what Babak Ganjei has done in his own version of multiple Golden Raspberry nominee Roadhouse, the 1989 film that cast the unlikely Swayze as prince among bouncers; the go-to-guy for rowdy bar management and drunken pest control. Those familiar with Ganjei’s sometimes deadpan, often self-mocking autobio comics like Twit and Hilarious Consequences, as well as his blog offerings, will probably be unsurprised that this engagingly eccentric project has come from his off-centre imagination. Those coming to his work for the first time may not, understandably, find this the perfect entry point but, despite its rather abstruse nature, Babak Ganjei’s Roadhouse is an oddly compelling read. 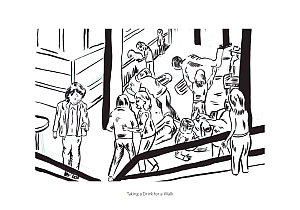 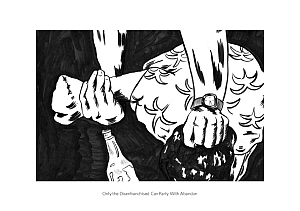 Ganjei took nearly 200 key images from the film and originally reconstituted them as a kind of “silent film” on the comics page. With the addition of a single line caption underneath, though, each picture in the collected book is designed to tell its own story as a discrete entity in and of itself. Thus this story of a notorious practitioner of the bouncing arts cleaning up the Double Deuce bar and taking down the local criminal entrepreneur gains an extra layer of philosophical contemplation. Sometimes the additional words may come directly from the movie, on other occasions they may be a witty retort commenting on the events within the panel, or they could be a quote from anyone from Foucoult or Baudrillard through to Steve Martin or Richard Pryor. 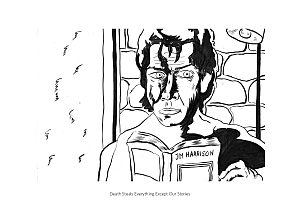 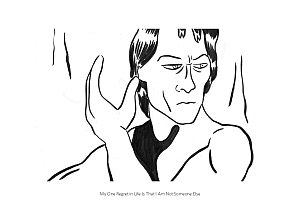 And so each frame becomes a mini-narrative in its own right – an admonition to live life to the full via the words of Jonathan Safran Foer in one perhaps, a rumination on epistemological arguments about the validity of self from Woody Allen in another, or even a bon mot about living in the moment from Bill Cosby surfacing in yet another. These chosen words are sometimes adding subtle context to a scene, sometimes brutally asset stripping them of it, and sometimes simply stating the bleeding obvious. 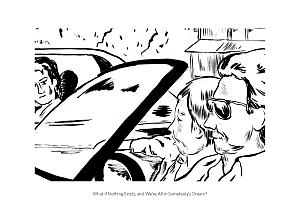 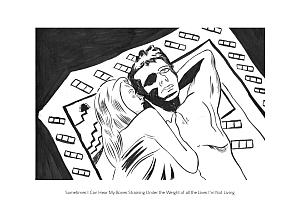 If I have covered an odder use of the form in my three years of writing this column you’ll have to forgive me for not being able to recollect it at just this given moment. Babak Ganjei’s Roadhouse is a book that should have the narrowest potential demographic appeal imaginable (especially given that there’s no escaping the need to sit through the film for the fond mockery of this hardcover to have any comedic validity). But there’s an almost obsessively alluring appeal to its use of cheesy Eighties B-movie excess to make flippantly tongue-in-cheek, yet strangely profound, observations about the human condition. And somehow it manages to be both a sequential reading experience and yet a totally disconnected one at the same time. 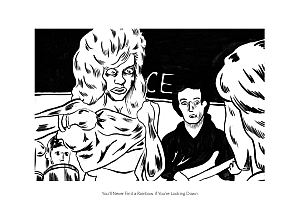 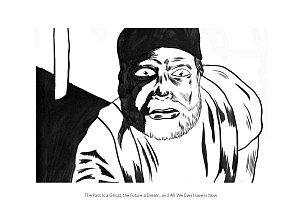 I can’t pretend that this is a graphic novel that is going to have universal appeal, or even microcosmic appeal for that matter, but if you can sit through a repeat viewing of Patrick Swayze as cinema’s most unconvincing doorman one more time then this idiosyncratically constructed pastiche will bring more than the odd wry smile to your face.

Utterly bizarre, utterly arcane, utterly individual. But most of all, utterly Ganjei.