The creators of Batman’s newest series deliver a solid and dependable comic with everything we have come to expect from this top-selling team. But the title of ‘Bat of the Month’ still resides with Detective Comics #30.

There’s a new officer in town – Jason Bard, transferred from Detroit, a city which (as all Batfans know) is merely a training ground for new recruits into Gotham’s Finest. Jason seems to be what my grandma would term, ‘a nice lad’. There he is, on the phone to his ma, telling her how pretty and twinkly Gotham is. And we, dear readers, shake our heads at this young man’s naievete. For we know what Gordon-lookalike Jason does not: Gotham’s real nasty when you get under the surface.

And so it proves. Batman and Jim Gordon are locked in a battle with Professor Pyg in a subway station. It ends in tragedy, an outcome which Commissioner Gordon appears responsible for. Poor Jason’s induction into GCPD ends with him being ordered to read Gordon his rights. Welcome to Gotham, lad: the place where heroes come to fall and where only Batman seems to survive.

This debut is an offering of great comic-bookery. Fans won’t find anything to complain about. It has all the features we come to expect from The Bat – GCPD inter-politics and corruption, the innocent under threat, and a fantastic bit of Batman beat-em-up.

At its core, this issue is about

the relationship between the Dark Knight and Gordon. The Commissioner is, as we all know, Batman’s other sidekick. The sight of them both running side-by-side, with Batman’s flowing cape mirrored by Gordon’s battered old overcoat billowing behind him made me smile about a mile-wide. And Batman’s offer to ‘not act Batman’ in the aftermath of Gordon’s error: “Not this time. I can stay”, is enough to touch the black heart of the darkest of Dark Knights reading it.

However, what I will say is that this isn’t the comic book to deliver innovation. And as I type these words, I cannot help but reflect on what a spoilt little Batfan I am. There is so much that is good about Batman and Batgirl comic books at the moment that anything other than ‘this is so perfect that I might cry’ leaves me empty with a bellyache for more. 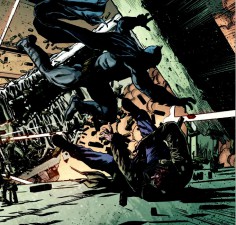 (for me, anyway) stems firstly from the choice of artist. This isn’t because Jason Fabok is bad at what he does. Far from it – this comic is full of action and fun, fuelled by that literal style we all know him for. The first page in particular is jaw-dropping and the splash when the subway trains collide is mind-blowingly great. However, Fabok was also the artist on Detective Comics up to #29, so picking up Eternal kind of feels like reading the next issue of ‘TEC rather than ‘something new’.

This leads to the second reason for my hesitation: Eternal follows last week’s Detective Comics #30 and in my mind – still fevered from the magnificence that was Brian Buccellato and Francis Manapul’s debut – it suffers for it. ‘TEC #30 is a different beast from the rest; a glorious mutation heralding the next 75 years of Batman and a comic that will live with me for a very long time. Eternal #1 hasn’t filled my senses in quite the same way.

However, this series needs time to grow. It is a weekly, so there’s going to be lots of it to get our teeth into. This is my general  problem with being asked to review comics: taking a single issue of any series is unfair to the team. A story deserves to be read end-to-end. But in this case at least we won’t have long to wait for the next issue.

PS: Batfans – Batman’s continuing campaign of animal brutality crosses over into this issue. There won’t be a farmyard animal left standing by the time Snyder’s through. Ha-ha!