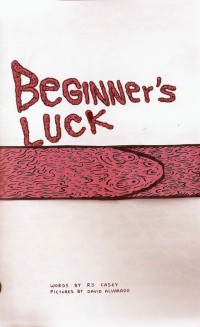 RJ Casey and David Alvarado’s Beginner’s Luck takes that old story of a small-time loser coming good only to squander his lucky break, and adds an ostentatiously surreal, aquatic twist to the proceedings. It follows an unnamed piscine protagonist who strikes lucky at the turtle-racing track in his very first foray into the world of gambling. But instead of sitting pretty with his winnings this fallible, philandering fish is subsequently sucked into the seedy side of the city – an environment of drink, drugs and casual pleasures of the flesh – leading to his inevitable comeuppance in this darkly comic morality tale…

Chicago micro-publisher Yeti Press was a relatively new name to me until recently but even a cursory glance at their back catalogue will reveal an intriguing array of minicomics and collections with a distinctively diverse assortment of styles and genres. From slice-of-life and autobio to fantasy, right through to the adult underground comix vibe of Beginner’s Luck, the multiplicity of approaches to the medium is on offer here is a welcoming sign indeed from a smaller publisher.

What will immediately capture your attention when first flicking through the pages of Beginner’s Luck is the shadowy, detailed caricaturing of David Alvarado’s visuals. His unbridled imagination in realising the comic’s underwater realm is evident in every panel, from the shell-like automobiles that traverse the seabed streets to the coral-style cityscape and its rather sordid inhabitants. No cutesy anthropomorphising going on here either; the deep sea denizens of this watery wastrel world are the grotesques of nightmare. It’s a bit like if Finding Nemo had been storyboarded by William Hogarth with additional input from Russ Meyer, and a perfect fit for RJ Casey’s story which, while perhaps slight in plot, is still a biting little piece of comedy noir.

For those of you who like that added tactile element to your small press books that eel-like pink character on the front cover (pictured above) is actually a detachable band surrounding the book. While regular readers will know that I embrace all forms of self-publishing and small press delivery in ‘Small Pressganged’, from webcomics to home photocopied and stapled comics, I’m always going to have a certain fondness and sneaking admiration for deft little touches that use the physicality of the printed comic to add to the overall reading experience.

Beginner’s Luck is a book which delights in immersing the reader in its grubby and squalid world as its central character spirals out of control towards his inescapable fate. A very adult parable and an enticing ten-page introduction to two creators whose previous/future work I will be no doubt be watching out for from hereon in…

For more on Yeti Comics check out their website here. You can purchase a copy of Beginner’s Luck from their online store here.