Beirut 1990: Snapshots of a Civil War is a touching biographical travel diary of two brothers to a land of war where we meet the people behind the abstract facade of ‘being at war’. 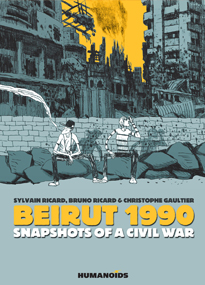 Sometimes personal accounts of war-torn areas of the world bring our inner being more in alignment with the people actually going through that war than a thousand detached journal items can accomplish. Joe Sacco clearly understood the emotional importance of these first hand accounts when he started working on his journalistic graphic novels like Palestine and Footnotes in Gaza. Though Sacco clearly wants to provide a face to the beast of war, he also provides heavy contextual and historical background information. Guy Delisle is another famous author who wraps his travel diaries to places hard to reach, or dangerous locales, in a graphic novel package but in his case human touches and drama are enlivened by a solid dose of humor. The brothers Ricard’s graphic novel travel somewhere inbetween.

Determined to help out the war stricken Lebanon, Bruno and Sylvain Ricard travel to Beirut to join an aunt working for a relief organization. Life on the front line though is less spectacular than they envisioned it, especially since the Lebanese people seem intent on getting the brothers out of harm’s way. They loiter, hang around and perform odd jobs like leveling out a bomb-stricken garden so that the patients can once more walk on even ground. After a while though, they get the chance to work with war victims in a hospital just outside of Beirut while striking friendships with several Lebanese youths. 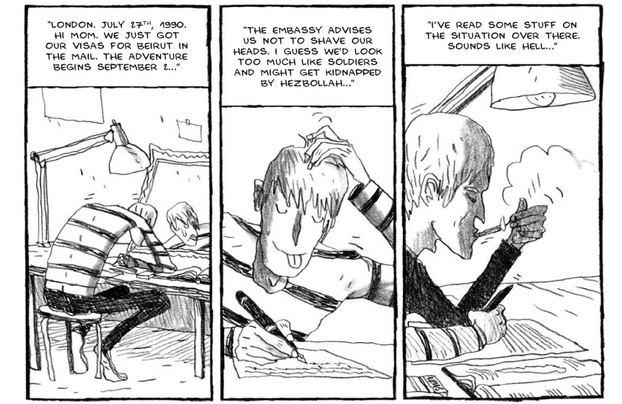 It is a touching memoir because the Ricard brothers succeed in transferring their emotions to the page. We get to explore several aspects of a besieged city, one being more mundane than the other like the quiet days alternating with nighttime bombings intended on unsettling the inhabitants in a psychological manner or the strange huge containers placed at corners that apparently make sure the people can move from one street to the other without fear of snipers. It is these little tidbits coupled with the viewpoint of the two brothers, frustrated out of their minds until they finally get to ‘do’ something that makes up the core of this graphic novel. 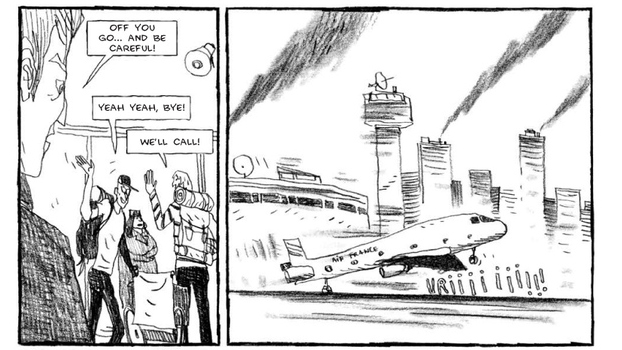 The drawings by Christophe Gaultier perfectly fit the mood that the Ricard brothers want established. It is playful, personal and expressive. Gaultier’s sketchy style evokes a personal resonation with both characters and background. He incorporates elements from manga to elicit emotions like enlarging the eyes or the dropping chin when an emotional dunk arrives and his comedic timing regularly breathes a lighter mood in the often dim proceedings. He captures the youthful exuberance of our protagonists perfectly.

A worthy addition to any reader interested in both history and its effects on the human psyche and its habitats, the travel diary Beirut 1990: Snapshots of a Civil War by Bruno & Sylvain Ricard and Christophe Gaultier is a sure fire winner.

So that’s it for this year! Crossing Borders will be taken a two week hiatus and be back on January 7th. To all my readers, much warmth and holiday cheer for the new year!

Beirut 1990: Snapshots of a Civil War by Bruno & Sylvain Ricard and Christophe Gaultier is published by Humanoids. It is a black and white hardcover counting 160 pages and retails for $29,95.