Set in Egypt in a technologically advanced near future timeline, the admittedly rather cumbersomely titled Cosmic VII and the Chronicles of Opus: Axiom 5 #1 follows the exploits of street operative and gambler Opus Noir, a minor league gang member who has a heretofore unexpected destiny. After suspecting he has been betrayed by the mob syndicate he works for, Opus discovers that a flash drive he picked up in a recent illicit collection contains information about the “Axiom 5” – the possible identity of the next incarnation of divinity on the planet. 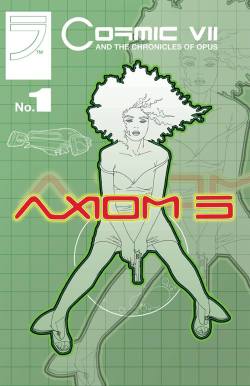 As a conspiracy unfolds, and both criminal forces and the religious establishment seek to take control of the situation, Opus begins to piece together his own fractured past and the role he may have in this theological web of intrigue. Kidnapped academics, crimelords and a royal princess turned exotic dancer all have parts to play in a complex game as a number of pieces on the board seek to manipulate this prophecy of coming spiritual enlightenment for their own ends…

Writer/artist Kini Knox is savvy enough to realise in Cosmic VII that effective sci-fi needs a strong foundation to build upon.  If you’re creating an alternate world with its own societal rules and idiosyncrasies then it’s imperative that its own internal logic is firmly established from the outset. In that regard this depiction of an advanced culture that still retains enough easily recognisable elements  to ensure audience investment is one of the book’s more successful elements.

For a graphic novel that is so dependent on its readership buying into that futuristic society, though, Knox’s black and white art really should not work in this context. Its sparse use of backgrounds robs it of the customary visual cues that are normally such an important part of science fiction comics. But in concentrating primarily on the characters themselves we are drawn more intimately into their stories and that economy of line works perhaps surprisingly well. What is immediately noticeable in the more frenetic parts of the book is the kinetic dynamism that the action sequences in Cosmic VII employ which contrasts effectively with the psychedelic trippiness of the scenes involving the explanations of that overarching Axiom 5 plot.

As well choreographed as those less sedentary scenarios are, though, there is a tendency elsewhere for plot progression to be somewhat unwieldy in places with large chunks of wordy exposition explaining key story points, and some rather clumsy changes from interactive dialogue between characters to first person narration at times.  And while it doesn’t detract from the storytelling itself there is a noticeable need for the book to have gone through a more thorough proofreading. The misuse of apostrophes is a particular distraction throughout.

At nearly 300 pages Cosmic VII and the Chronicles of Opus: Axiom 5 #1 is a somewhat epic undertaking which ends on something of an abrupt cliffhanger. Its central plot is hardly original but Knox weaves enough in the way of sub-plots around that core conceit to keep the reader’s interest. It’s a sprawling graphic novel with a plethora of characters to keep track of but those who like their sci-fi cut with more than a hint of hallucinogenic mysticism will no doubt find something of interest here.

You can buy a copy of Cosmic VII and the Chronicles of Opus: Axiom 5 #1 via Kini Knox’s Aquatic Gypsy Soul Circus on Amazon here priced $23.99

Tags: cosmic vii and the chronicles of opuskini knoxsmall press