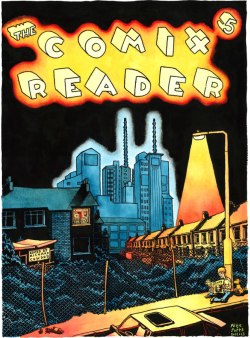 “Anything can happen in the next half hour!” – it’s the tagline, of course, of Gerry Anderson’s cult ‘60s Supermarionation series Stingray but it’s one that could also quite easily apply to the time invested in UK small press anthology The Comix Reader, such is the rich diversity of approaches, subject matter and stylistic playfulness inherent in every issue to date. The creative collective behind this newspaper format publication see the fifth issue of their collections of one-page strips published this month, once again acting as an ideal gateway to the work of the artists therein for those looking for a suitable entry point into the UK small press scene.

When speaking of our ever burgeoning family of UK small press anthologies in ‘Small Pressganged’ I often underline that, regardless of how many of them are now extant and the finite pool of creators they draw from, each of them still retains a distinctive “voice”. The Comix Reader has a more underground feel than some its siblings in that arena, and I suspect the crossover appeal of its strips between both the comics and zine enthusiasts on the small press publishing scene is more pronounced.

Longer-term ‘Small Pressganged’ readers may remember that I included The Comix Reader in my 2012 end of year round-up column ‘Ten UK Small Press Comics You Need to Own!’ last year arguing that “At an incredibly affordable price… it means that even if you only enjoy half the strips on offer here you still come out a winner. Only the cheapest of churls could surely argue otherwise.” A soundbite I stand by in regards to this fifth issue because that quality-of-material-to-price-ratio makes The Comix Reader the best value buy you’ll find anywhere in the small press… or outside of it for that matter. 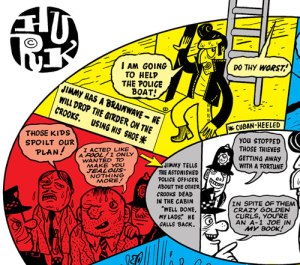 Now, given the nature of its one-pager set-up The Comix Reader offers some particular challenges for anyone attempting to critique its interiors. I am conscious that I’m walking a very fine critical line here. Either I’m going to be overtly oblique in analysis or I’m going to risk the possibility of ruining the joy of discovery for the reader of a clever narrative trick, a neat punchline or a cunning subversion of the form. So I shall endeavour to convey a sense of tone and tempo rather than overwhelm you with specifics over the next few paragraphs, in the hope of walking that steady middle path between being obscure and being indiscreet.

The opening offering from Paul O’Connell and Dan Locke is a good example of the necessity of a cautious attitude when evaluating The Comix Reader for an external audience, in order to avoid robbing you of some of the potency of this piece. Suffice to say this is a strip wherein the creators consciously manipulate the boundaries of the single page available to them to their sly advantage – a subtle difference, perhaps, but they don’t so much deconstruct the comics page as disassemble it – and accentuate their story’s deeply unsettling and paranoiac atmosphere as a consequence. 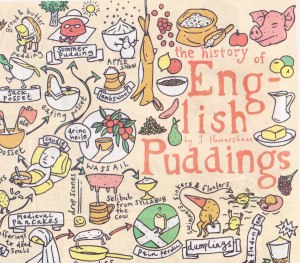 Indeed, the most interesting work on show here is that where the contributors have clearly come to the single page thinking of that not as a limitation but as a unique opportunity for storytelling. Steven Walsh and Mike Medaglia, for example, invite us to become intimate observers of a twisting, melting full-page London cityscape, witnessing the inner thoughts of its inhabitants in an almost intrusive way. Lord Hurk gives us a strip that again toys with the traditional panel structure of the page, teasing its form to delightful effect (above right). And in ‘The History of English Puddings’ (small sample above left) Julia Homersham approaches that singular space available to her as a cluttered canvas rife with busy promise. To abandon the requisite articulacy of the reviewer’s art for one moment, Homersham’s was the work that gave me the biggest “Wow!” moment of the issue.

That’s not to say, of course, that the more traditionally structured comics here are lacking in power or sway. There are a number of differing approaches to the slice-of-life strand of storytelling, for example, that emphasise why comics are such a strong medium for portraying autobio work. Bernadette Bentley provides us with ‘England’s Glory’, a vignette that is both a fleeting character study of eccentricity and also a rather poignant piece. Ellen Lindner gives a transitory rumination on an art form out of its time (of mass appeal) and the fervent loyalty of its admirers in ‘Opera’, while James Parsons’s memorable ‘Unconscious Desire’ channels the grotesqueness of Ken Reid or Basil Wolverton in a distinctly adult way in a tale of sexual awakening triggered by Superman II villainess Ursa…

As I said at the top of this column the true joy of The Comix Reader is that you never know what you’re going to get next when you turn the page. One moment you may be dipping in to Peter Lally’s dark tale of the most nightmarish of taxi rides, feeling as claustrophobic and powerless as its protagonist (above) while the next you’re entering the bizarre dreamscape of Tobias Tak (below) discovering just what it would have been like had Lewis Carroll ever written any sci-fi.

Whether it’s the knowingly retro functionality of Craig Burston’s visuals on ‘Lo-Res Des’, Ralph Kidson’s deft comic timing and ever masterful construction of the gag strip, or Sean Duffield’s more obvious but no less funny parody of The Krankies, the assortment of styles and techniques on show here is a testament to the robust health of the small press creative community in UK. The cynics may dismiss that as ostentatiously effusive praise but every time I pick up a British small press anthology I’m reminded just what a genuinely exciting time this is for micropublishing. If you’re reading this edition of ‘Small Pressganged’ and you don’t fit into that section of my audience that I mentally file under “Converted, Preaching to the” then I can only urge you to obtain a copy of this most affordable of intros to 20-plus (largely) Brit-based indie talents. I’ll give you the two quid back myself if you don’t find at least something herein that makes you feel it was a worthwhile purchase…