It’s time to take another trip into the tortured psyches of Messrs Collins and Laurie and become witness to twisted familial obligations, breakfast time in Hell, and the social faux pas of the demonic classes in the latest print collection of their online strips… 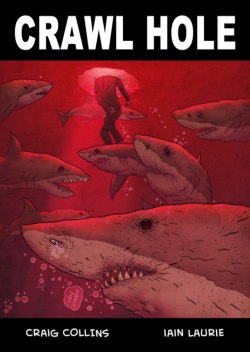 Some writer-artist combinations seem born to work together, although in the case of Craig Collins and Iain Laurie I’m not sure if this partnership represents fortunate happenstance or punishment for transgressions in their former lives. Crawl Hole presents five strips that combine the usual collection of the macabre, the bizarre and the really rather random that I’ve come to expect from them after reviewing previous collaborations like the deeply dark Roachwell and the carnage-filled splatterfest Metrodome. It’s always difficult to discuss short story anthologies like Crawl Hole without giving away the crucial plot points on which the stories centre and thus making the exercise of reading them pointless. I shall attempt to be succinct but teasing, then, in describing the general air of the material within these covers and why, once again, it proves so effective.

To begin we get a multi-lingual and horrific take on family tradition and the right to die in ‘House of Mercy’ that, despite its overt surrealism and violence, is almost strangely understated in its delivery. There’s a trip to the netherworld in ‘Food, Glorious Food’ for a lesson in culinary skills with a nursery rhyme tempo that seems to be visually channelling the great Kevin O’Neill (below). We also observe the pressures of being a pensioner monster slayer in ‘The Quiet Burden’, a tale with a particularly interesting musical backdrop. And in ‘Regression Artifact’ an awkward meeting between exes echoes across other planes of existence.

My only reservation with Crawl Hole is that because it’s such a brisk read (the strips range from just one page to six pages in length) that, in isolation, it probably won’t be the best entry point for readers new to the Collins/Laurie style of disturbing humour shorts. Just when you’re getting into their warped mindset the comic is over, so from that perspective I’d suggest reading it in conjunction with either Roachwell or the multi-artist Haunted Bowels. 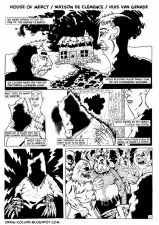 These are the guys that gave us the sublime ‘Seamus Heaney’s Heinous Penis’ though so, quite frankly, at this point I’d probably even forgive them if they worked on a Before Watchmen book. Once again Crawl Hole is material that makes the reader positively delight in the unnerving; if you like your comics riddled with a creepiness that will leave you feeling profoundly uncomfortable after reading then you can’t go far wrong with a Collins-Laurie offering.

For more on Craig Collins’s work check out his site here and Iain Laurie’s here. Crawl Hole is available to buy here priced £2.50 .