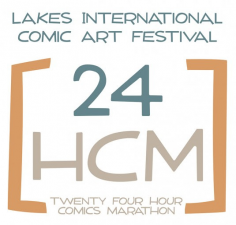 The organisers of the Lakes International Comic Art Festival have announced that not one but two artists will be joining its first 24 Hour Comics Marathon alongside five previously-announced comic creators.

They have also announced a number of other guests for the Festival, which takes place 17th – 19th October, including Gail Simone, Dave Gibbons and Jeff Smith.

After putting a call out to the comic creator community for additional team members for its 24 Hour Comic Marathon, the Festival and Marathon Co-ordinator chose Joe Decie and Warwick Johnson-Cadwell to join the team who will aim to create a comic book in a day – which the Festival also hopes to print on the same weekend.

Joe is the author of The Listening Agent and The Accidental Salad from Blank Slate Books and Pocket Full of Coffee from Retrofit Comics.

Warwick has worked with Blank Slate Books, Self Made Hero, The Dandy, The Phoenixand most recently with Titan Comics on Solid State Tank Girl. He is the co-creator of Dangeritis from Great Beast Comics.

Joe and Warwick join the previously-announced artists – Dan Berry, Kristyna Baczynski, Sarah McIntyre, Fumio Obata and Jack Teagle – in the marathon, which will start on Thursday 16th October, as part of the Festival.

The 24 Hour Comics challenge was devised by Scott McCloud – also a guest at the Festival – in 1990 and thousands of artists have risen to this challenge since.

“The quality and quantity of the applications was very high, making choosing a significantly difficult task,” say Festival Director Julie Tait and Marathon Co-ordinator Dan Berry in a joint statement on their final choice.  ”While there was some very stiff competition from some incredibly talented and supremely capable artists, we felt that Joe and Warwick would not only rise to the challenge of the 24 hour comic, but would excel at it. Each of their distinctive styles and approaches to storytelling stood out from the applicants and we are thrilled to welcome them aboard.

“We would like to thank everyone who made an application and look forward to developing the Lakes International Comic Art Festival 24 Hour Comics Marathon further in 2015.”

In addition to announcing the final creative line-up for its Marathon, the Festival has also announced a number of top comic creators will be attending the Festival in Kendal in October, joining Scott McCloud (http://scottmccloud.com) and many others for an entire weekend of comic activities at various venues in the town.

• Gail Simone is the writer of Birds of Prey, Secret Six, Welcome to Tranquility, The All-New Atom, Deadpool, Red Sonja and, it was recently announced, a Savage Wolverine story. More info: http://gailsimone.tumblr.com

• Writer and artist Dave Gibbons numerous credits include Dan Dare  and Rogue Trooper for 2000AD; Doctor Who,  Give Me Liberty, The Originals and Green Lantern Corps. He is the co-creator of Watchmen – the latter one of the best-selling graphic superhero graphic novels of all time. You can find Dave here on Twitter: https://twitter.com/davegibbons90

• Comic artist Jock is best known for his work on 2000AD, on strips such as Judge Dredd and Lenny Zero – and for Vertigo’s The Losers, which was written by fellow Brit Andy Diggle. He was also the main concept artist on the Dredd movie. More info: www.4twenty.co.uk