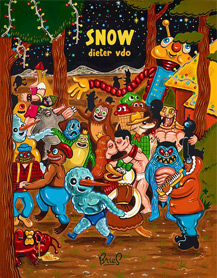 When a carrot-nosed snowman stuck in a block of ice lands up at an unknown island where the waters are polluted with barrels containing radioactive waste, the snowman needs to find his way home through jungles, deserts and underground kingdoms filled with all manners of strange mutates.

VDO has been published in a variety of underground and alternative magazines most notably being a story in the Savage Dragon Anthology spotlighting alternative creators and a pin-up in – of all places – Michel Fiffe’s much lauded self-published hit series Copra. His paintings are an eerie mix of monsters and mutates in a stunning variety of bodily contortions, shapes and frightful features. He likes to put in obscure winks to popular culture – some more hidden than others – but never to the detraction of the illustration or story being told. His colour work is bright and in-your-face and exudes a joyful experience that violently contrasts with the abominable creatures populating his works.

It’s this dichotomy between violence and buoyancy that makes VDO’s work so attractive. There’s a playful quality at work, enhanced in Snow by being essentially a picture storybook for adults. The joy is not in the story but in the telling of it and more specifically by studying the visuals. I get the same kind of visceral joy by reading f.e. Jane, The Fox And Me by Isabelle Arsenault though being a very different book based on the visuals. It is the art carrying the experience while the story lets us turn the page. I can see VDO being picked up for translation instantly by a publisher like Fantagraphics where Snow can sit comfortably next to their Basil Wolverton volumes or Fifties horror compendiums.

Blending effortlessly the language of art and comics into stunning vistas of phantasmagorical horror, populated with creatures resembling (or not) childhood icons like Batman, Donald Duck, Sus Antigoon, ET, the Creature from the Black Lagoon etc., VDO has become the castout lovechild of Francis Bacon and Basil Wolverton. Dieter DVO’s breakout graphic novel Snow will terrify you, astound you, fill you with wonder and most definitely leave you haunted for the rest of the week. Highly recommended.

Snow by Dieter VDO is published by Bries. It is a full colour European format hardcover counting 56 pages and retails for €20.