SLCZF WEEK! One of our 2022 Broken Frontier ‘Six to Watch’ artists, Alba Ceide has been working behind the scenes for some time now on a world-building, shared universe project with the umbrella title The Earth Blues Series. The series has an environmentally conscious premise and Ceide has published two minicomic introductory chapters Marghera Blues and Forehead Blues as short stories, with a longer-form comic Salamanca Blues in progress. 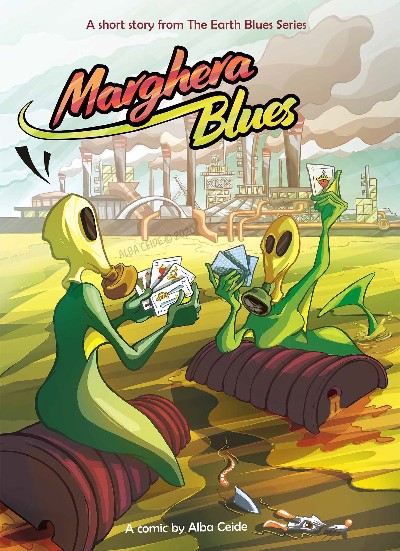 The Earth Blues Series combines sci-fi and fantasy with social commentary. Marghera Blues is the first entry and uses the real world case of the environmental damage that the Porto Marghera chemical plant did to the Venetian lagoon over many years as its inspiration. In this opener Ceide introduces a whole new society beneath the waters of a now largely deserted Venice where radioactive crabs and mutant fish people breathe a weary sigh of aquatic relief at a waning human influence on their world.

In Forehead Blues, the first chapter of a wider work, Ceide takes us to a future where capitalism rules supreme, and where those without money have no rights and are treated like criminals (though admittedly that could also apply to our society in 2022!). The “forehead” of the title presumably coming from the enlarged cranium of its unlucky protagonist who loses everything in this opening instalment. 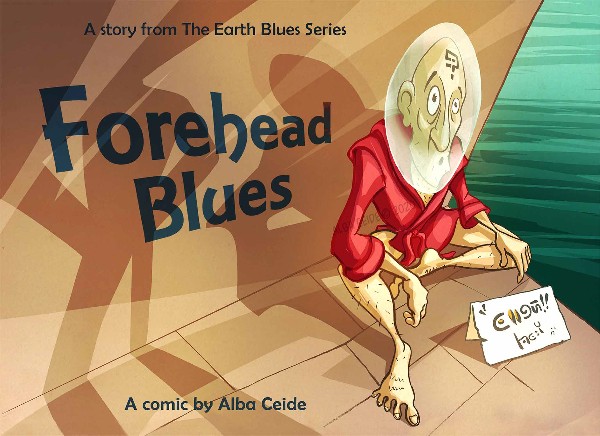 Marghera Blues also acts as a parallel for our Covid times with a mysterious virus having wiped out most of Venice. Here Ceide mixes humorous cartooning with a stark point about crossing the ecological point of no return. While one might presume that the vibrant energy of her cartooning would seem incongruous for that message in fact the opposite is the case; the juxtaposition of kinetic and caricatured art with a sense of grim foreboding actually ensuring that the themes of the story hit home all the more forcibly.

That’s also very true of Forehead Blues where the cartoon slapstick only serves to make the satire more effectively biting. Ceide makes deft use of the possibilities of the landscape format in Forehead Blues with ever changing page structures, strong use of white space where appropriate to draw the readers’ eyes to the mechanics of character interaction, and lettering effects that truly emphasise elements of conflict and emotion.

If you’re looking to discover just why we rate Alba Ceide as a creator to watch at BF, these two minicomics are a fitting introduction to her ever inventive cartooning at the South London Comic & Zine Fair this weekend.

Alba Ceide is at Table 3 at the South London Comic and Zine Fair this Sunday July 10th.