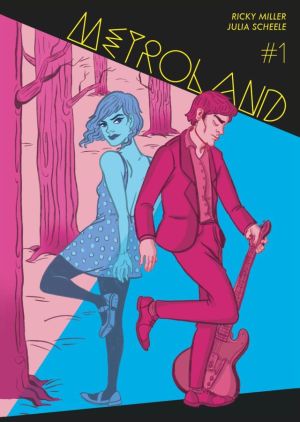 With its heady mix of music industry drama, time-travel fantasy and borderline psychogeographical undertones, the basic premise of Avery Hill’s Metroland defies easy genre definitions. At its core are two central characters: the enigmatic Jessica Hill and the irresponsible musician Ricky Stardust, both of whom are part of emerging indie group Electric Dreams. Jessica’s presence in Ricky’s life, however, is far more complex than the two being merely bandmates. She has the ability to travel in time, and their relationship poses a number of intriguing questions about the world of Metroland; a reality that echoes our own but with a number of sometimes subtle, sometimes glaring differences.

Why do Ricky and Jessica go missing so often? How are history’s “mistakes” being rectified? Why are those who were once dead now alive? What is the mysterious otherworldly Metroland that Ricky dreams of? And what is coming for the group in the near future that will rip their ranks apart and threaten the very end of the world itself?

Metroland originally debuted in the pages of Avery Hill Publishing’s artszine Tiny Dancing before making the transition to volume 1 of their comics anthology title Reads where its first incarnation recently concluded. That wasn’t the end of the road for the concept, however, and as part of AHP’s mini-explosion of new comics (being officially launched at Orbital Comics this evening) the series is being rebooted for a whole new group of readers to discover from the ground up. 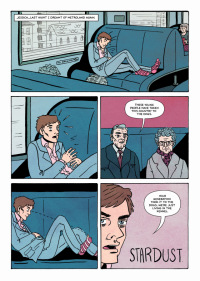 Reboots are a curious phenomenon, of course. We hate them when years, if not decades, of a narrative that we are invested in are casually swept away for cynical marketing reasons. But we welcome them when they allow us convenient entry points to something that has piqued our interest but seemed too inaccessible to investigate further in the past. This is a re-imagining that has the purest artistic motivation, though; an exercise in perfecting the art of creativity, an opportunity to refine the story, and a chance to hone the project to be the best it can be.

It’s a sensible decision for other reasons, too. The nature of the original Metroland’s venue-jumping history meant that few readers who discovered it via Reads were going to experience anything other than “a late to the party” vibe. And if there’s one thing that is abundantly clear from this first feature issue of Metroland it’s just how far Ricky Miller’s storytelling skills have developed since I first discovered the strip a couple of years back. It deserves revisiting and re-crafting. And with the vibrancy and fluidity of collaborator Julia Scheele’s art, and very impressive support on the back-up strips from Rebecca Strickson and Jazz Greenhill, this new manifestation of Metroland is also a visual delight.

I suspect a major appeal of this book over the course of its planned five issues will be in slowly placing all the interlocking parts of its overarching storyline together. This opening instalment contains teases as to what our time-jumping cast may be up to, with a poster for a contemporary reunion tour of The Beatles being the most obvious. But it’s the division of Metroland #1 into three discrete but interlinked stories that so forcefully grabs the attention, investing the reader in the mystery at its core and inviting their interaction with its convoluted but enticing multiple timeframes and blasé use of temporal paradoxes. 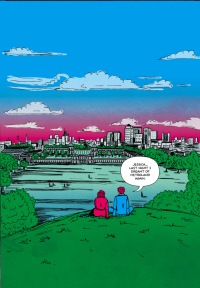 With such a sprawling cast of players between its covers there was always going to be a touch of the soap opera about the character interplay of Metroland and, indeed, this first issue is as much about the internal conflicts regarding Jessica’s unreliability in Electric Dreams as it is about the fantasy time-twisting elements. And characterisation is where Miller and Scheele’s creative connection is most obviously emphasised. While Miller’s dialogue is often snappy and playfully witty – underlining the casual confidence of Jessica or the roguish indifference of Ricky – it’s the subtler, visually-led moments of character definition where Scheele shows us the people behind the facades they project: a haunting dream sequence, or a quiet moment of poignant contemplation, employing a deceptive air of understatement to speak volumes about the book’s protagonists. A sense of location is also an essential part of Metroland’s identity – with geography often reflecting mood or narrative thrust – and again Scheele excels in underlining this connection. Just look at the page above right with Ricky Stardust’s emotional state so evocatively mirrored in the expansiveness of his surroundings for an excellent example.

This opening issue works so effectively because its fractured narrative sums up its central conceptual conceit to such an enticing degree. The main story propels the contemporary, primary strand of Metroland but the two back-up stories supplement and enhance the total vision. In the first a young Ricky, playing on a beach as a child, has his first crucial meeting with an adult Jessica Hill in a story that foreshadows the nature of their future relationship. Rebecca Strickson’s stunning photorealistic art here gains a washed feel from the vibrant yet faded colouring which emphasises a sense of retrospection and temporal displacement. 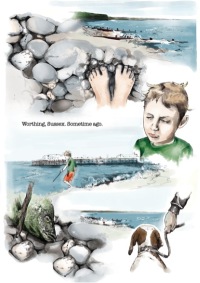 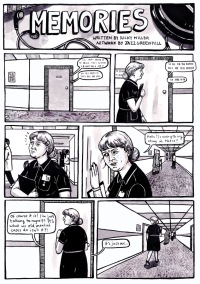 The second back-up fast forwards to what appears to be the twilight of a geriatric patient’s life as he tells stories from the life of Ricky Stardust and Electric Dreams. There are more puzzle pieces here for the audience to put together – and obvious questions of identity to speculate on – but I will leave it to the individual reader to make their own deductions. Jazz Greenhill’s stark black and white illustration gives an air of impending finality to a story which, ironically, is only just beginning for the observer.

Metroland #1 is an absolute vindication of the decision to reboot, and a comic that will reward your committed re-reading. Miller is defiantly unafraid to make the reader work a little harder; rarely a bad thing but one that takes a significant amount of authorial courage. This is the fourth and last of Avery Hill Publishing’s summer explosion of comics to be reviewed here this week in the lead-up to their launch party at Orbital Comics, and it’s every bit as compelling a read as its predecessors! Not so much a reboot as a rebirth…

For more on Avery Hill check out their website here. You can purchase a copy of Metroland from their online store here priced £5.00.