High art ahoy as both Picasso and Shelley received a multiple volume biography in comic form. 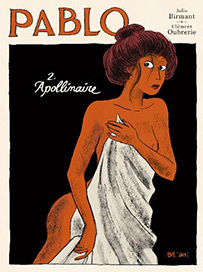 As told by Fernande Olivier, one of Picasso’s main models in his beginnings and an inspiration during his Cubist period, Pablo is a sweeping tale of art, romance and friendship. Taking place before Picasso became famous, it gives a rollicking account of the Parisian art world with a touching sense of humour and emotional heart.

Written by Julie Birmant and illustrated by the excellent Clément Oubrerie from Aya: Life In Yop City, Pablo is a free-for-all mad tumble into the headspaces of a young Pablo Picasso and his circle of friends. It’s a clever move to have the character of Picasso come to the front by focusing on his interactions with his friends and rivals. And what a bunch of friends it is: Guillaume Apollinaire, one of the great poets of Surrealism; Gertrude and Leo Stein, eccentric art benefactors, Ambroise Vollard, renowned art dealer, etc. The blurb at the back says it all:

Montmartre, 1905: Picasso’s entourage concerns itself with creating modern art. Not admired but more shunned to the side, they are confident that this won’t last. United by opium and magic, they are ready to take the fight to the art world. What glorious days these are!

Make no mistake though, these are romanticized events but as the authors note on the back, it does not mean that the events presented are not true. This whimsical take on the early 20th century French art scene is superbly illustrated by Oubrerie who employs a more washed out style with delineations than in her Aya series. The color work enhances the dreary atmosphere but the figure work keeps things lively and the mannerisms and acting of the characters reflect the positive attitudes of all involved.

As Mark Twain said: ““Whenever you find yourself on the side of the majority, it is time to pause and reflect.” And it is this frivolous atmosphere that Birmant and Oubrerie evoke in Pablo. It is a great series that does not become a slave to history and it succeeds in evoking an atmosphere that involves the reader in an educational way.

Pablo is a three volume series published by Dargaud. All are 88 pages in full colour with a hardcover. Each volume retails for €16.95. This review was based on the Dutch edition published by Ballon Media. 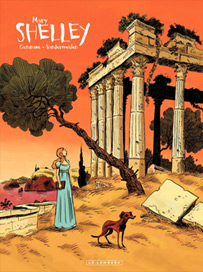 Although Percy Shelley is considered one of the great romantic poets of the English language, appreciation of his writings is mostly limited to the more literary circles. His cultural significance is forever overshadowed by the writings of his wife Mary Shelley who wrote one of the great classics of our age: Frankenstein. So where volume 1 of Shelley by Casanave & Vandermeulen concentrated on the great romantic poet Percy Shelley much to the disappointment of many a Mary Shelley fan no doubt, Mary now takes a few steps into the spotlight.

But where Pablo hits all the right notes in a biography, writer David Vandermeulen’s Shelley gets it all wrong. Shelley suffers from a need to mould all the facts of Percy Shelley’s life into a compelling narrative and suffers from a most destructive ailment: there’s no real tension in the story arc and it all falls rather flat. Not the best of ways to honour one of the greatest poets of the English language.

Aside from the lack of tension, Vandermeulen tries to inject some liveliness into the proceedings with humor and catchy dialogues but it never turns out to be funny and the dialogues just feel awkward and lacking. It all turns out to be quite the bore with even the creation of the Frankenstein novel presented in a disappointing matter of fact way. To make matters worse, Vandermeulen suddenly veers off into an unexpected direction about two thirds of the album by putting the main players of Percy, Mary and the Byrons into the plot of Mary Shelley’s The Last Man: stranded on a deserted planet ravaged by the black death. I can detect no discernible reason for this, it adds nothing to the story of the Shelleys and it certainly is an odd choice for a series previously devoid of subtext and metaphors. Maybe it was a last desperate attempt to add some excitement to the proceedings? 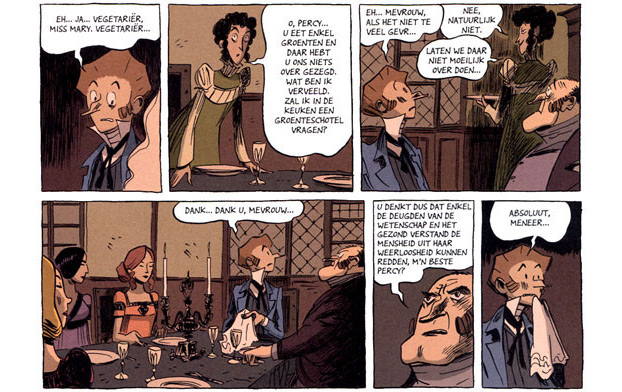 Vandermeulen’s script is not helped at all by the renderings of Casanave whose Manu-Larcenet-meets-Joann-Sfar style of drawing is devoid of rhythm and excitement. His elongated figures lack a certain pliability with especially Mary coming off as stiff and rigid and just too cutie-faced. His pages consist of panels after rigid panels, failing to bring a storytelling rhythm to an already colorless script. Though the settings of story of the Shelly’s contain some material to produce stunning vistas, Casanave never opens up the pages to provide breathing room or a solid look at his drawing skills.

Shelley Volume 02 by Casanave & Vandermeulen is a book only for the diehard Shelley fans but even then, I doubt they would find anything new to peruse in this by-the-numbers two-parter.

Shelley Volume 02 by Casanave & Vandermeulen is published by Bloan. It is a full colour hardcover counting 72 pages and retails for €14.95