Yesterday, Zero and newly-vested Secret Avengers writer Ales Kot posed a question on his tumblr page. After hearing reports of a retailer at Comics Ink in Culver City, CA tearing up a copy of Pretty Deadly #1 in front of customers, Kot was concerned about the arbitrary destruction of what he considers a piece of art.

Calling for an industry-wide conversation about the treatment of not only creators but retailers and readers to take place in the comics press, Kot took things a step further, questioning whether or not the behaviour was misogynistic in nature because three of four Pretty Deadly creators are women.

Comics journalists: so I hear that a retailer at Comics Ink in Culver City tore up a copy of of Pretty Deadly #1 in front of the customers. Let’s start an industry-wide conversation about the way we (professionals, retailers, readers) act towards each other. Also, was this move fueled just by anger about the product, or also by misogyny? The comic was created by three female creators & one male. I want to see a conversation happen. I don’t want to see shit like this swept under the rug. 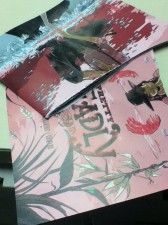 After a quick search, the only mention of this incident in Culver City to be found was a paragraph hidden deep within Hannibal Tabu’s The Buy Pile column on Comic Book Resources (Tabu also took the picture on the right – ed.):

The retailer at Comics Ink made the case that “Pretty Deadly” #1 has superseded “The Monarchy” as the worst comic ever. The case that was made was that this comic combined “psycho babble, [being] pretentious, bad writing and meandering.” While it has only one issue to “Monarchy’s” twelve, it is remarkable in its rough hewn, unfinished looking art, drifting narrative and tedium. Said retailer tore a copy of the issue up in front of customers, stating there’s “nothing in there that makes you want to pick up the second issue.” That’s hard to argue against.

Why did Kot put forth the question of whether or not the retailer’s actions were misogynistic behaviour? To be sure, this wasn’t the most responsible expression of displeasure a comic book retailer has ever made but to be fair, BF contacted the owner of Comics Ink for his take on the incident. He was, after all, the man who did the deed.

Steve was caught quite off guard by the call; BF was the first to contact him. He stated he was unaware of Kot’s comments or any controversy that had arisen from his actions. Steve’s side of the story essentially played out as follows:

Having read the comic and surrounded by a group of customers, Steve tore up the first issue of Pretty Deadly, because he was trying to impress his audience with a quick – and let’s be honest – brutal assessment of the comic. When asked if the book was really so bad as to warrant destruction, Steve didn’t hesitate to reiterate his opinion of the comic: “the art was muddy and the script never came together for me”. Now, this is criticism that could be applied to any number of books currently being published but does it warrant its dismemberment in front of potential consumers?

Absolutely not. Symbolic or otherwise, the destruction of art is never a condonable offense, even though Steve never intended to offend anyone’s sensibilities: “I wasn’t trying to offend anyone. It doesn’t matter who the creators are.” Kelly Sue DeConnick, Emma Rios, Jordie Bellaire, and Clayton Cowles put a lot of heart and effort into a book they quite obviously believe in. However, they failed to win Steve over. He simply didn’t like the book, and he’s entitled to that opinion.

Did he express his feelings in a constructive manner? Not at all, a fact Steve admits to: “I’ve been running this shop for years. It’s a small community. I should’ve known better.”

When BF approached Ales Kot for his views on the subject, he was gracious enough to clarify his position and the intent behind his tumblr post:

“My real, true interpretation of the events is this: Steve tore up a comic book, something people who did nothing wrong to him created with love and care, without considering and/or realizing how it might feel to them. This is not the first time I saw a rather inconsiderate act in the comics industry happen. What I want to see is an industry-wide discussion between professionals, retailers and readers on how to get to a place where the inconsiderate acts will be less frequent — and eventually won’t happen.”

Kot also notes, “I am also not interested in villainizing anyone, including the retailer. Antagonizing people never helped me. What does help, in my view, is using anger, using being upset over something, as a fuel, not as hands on the steering wheel of my actions. I got upset. I was angry. So I took that energy, calmed down, and then used that energy to serenely fuel my actions — and instead of lashing out, I asked for a conversation. Einstein once said: “Everything is energy. Match the frequency of the reality you want.””

Upon being asked if he was worried he was in danger of patronizing female creators by championing their cause, Kot pointed out two important aspects:

“It’s not just “their” cause, it’s my cause as well. I want to work in an industry where people treat each other — and their work — with kindness. This doesn’t mean I won’t explore all of my feelings and thoughts on something — I intend to, even if someone won’t like them — but that I do so in a way that takes other people in consideration, and therefore consciously avoids generalizations, acting out of anger, brutality, misogyny and such.

“As for the risk of patronizing — I believe this question is based on the idea that I stated the retailer’s actions were misogynistic in nature, something I never said. In case this question isn’t based on the idea, my answer is no, I don’t think there is a risk of patronizing female creators, not at all. All I did was ask questions. I wondered out loud and I asked comics journalists and the entire comics community to have a conversation about the way we treat each other. And the conversation is happening. This is a positive change and each one of us can make it happen any time we want.”

Whether or not a conversation about the ethical treatment of creators and their work needs to take place seems like it should be a moot point. Writing and drawing – the creation of art in any form – has never been the sole province of either gender.

Unfortunately, the reality of the situation is that acts of prejudice, ignorance, destruction, and even misguided attempts to make with the funny in front of your friends and customers all feed into an unhealthy atmosphere of casual acceptance and/or apathy, making the discussion Kot passionately calls for imperative to the health and evolution of comics art.

For this story, Broken Frontier also reached out to Pretty Deadly writer Kelly Sue DeConnick, but she declined to get in on the debate. The fact that her opening issue blew through its first print run at deadly high speed should be a sufficiently strong response.

Update: DeConnick has posted a response on her own tumblr, titled The Only Statement I Will Make On The Matter. ‘Nuff said. 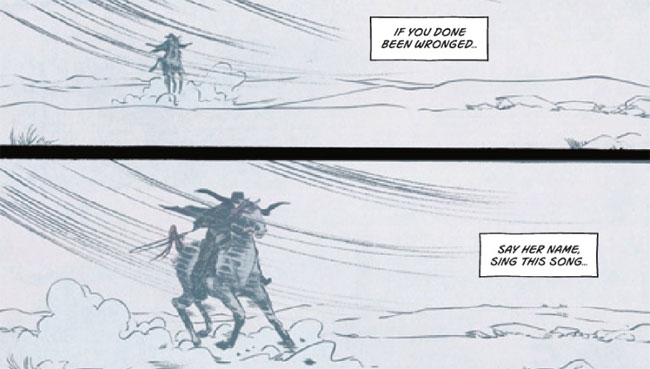