Accent UK’s lycanthropic noir series has enjoyed cinematic comparisons from the likes of Andy Diggle who described it as “Reservoir Wolves” and Kieron Gillen who summed it up as “Get Carter by Moonlight”.  I’m not surprised that either of these esteemed U.K. creators chose to make filmic allusions in regards to this material because writer Dave West and artist Andy Bloor’s tense supernatural thriller certainly has some big screen sensibilities to it, capturing a certain strand of British crime drama to moody effect. 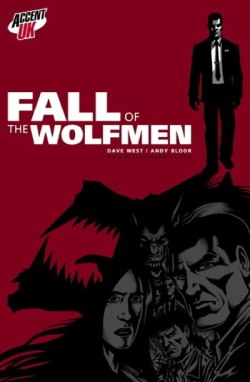 Jack Grey is a minor criminal who is about to discover that his opportunity to make it to the big leagues is going to come with a major price. Recruited for a bank job by the criminal faction known as the Wolfmen, Jack discovers that his violent new associates’ vulpine attributes are a little more literal than he had imagined. When you sign on with these guys, though, there’s no opt-out clause after the fact, and our anti-hero protagonist is about to see his life collapse around him as a result…

The Wolfmen is another strong example of Accent UK’s approach to comics. It’s a point I’ve made before at Broken Frontier when reviewing their Westernoir series and Missing: Have You Seen the Invisible Man? and it holds true with the Wolfmen books too – Accent UK’s material is hardly boundary-pushing, or seeking to reinvent the medium, but it is always solidly entertaining, escapist fare. In the first Wolfmen book, Dave West gives us a compelling central character in Jack Grey who, in the best noir traditions, becomes caught up in events out of his control through his own poor life decisions.

West’s scripting is taut, well-paced and with a tense tempo throughout. Although this is earlier work than the previous Accent books I’ve covered, I have come to expect this level of consistently well structured storytelling and characterisation from West.  The follow-up comic Fall of the Wolfmen continues in this vein as Jack begins his mission of vengeance against the werewolf crime family who are also facing a threat to their power base in South London. Wisely, West expands the focus of the arc by pulling back and examining the events from the perspective of Grey’s girlfriend Jen, adding another layer of intrigue to the proceedings.

Andy Bloor’s art is an object lesson in how to use monotone visuals to convey mood and create atmosphere. He positively delights in using the deepest, darkest blacks to foster a sense of impending menace throughout both Wolfmen books, accentuating the brooding character of West’s script to an almost sinister degree. And his character work is sublime here with subtle expressions speaking volumes about characters’ emotional states, and the grotesquely feral antagonists of the story, with their inhuman, unwieldy proportions, making for memorably fearsome bad guys. 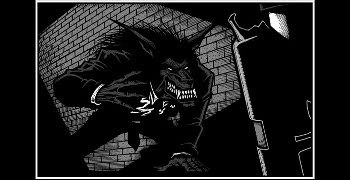 Accent UK’s back catalogue of books is well worth a jolly good perusal if you haven’t before. If you’re a disillusioned Big Two reader looking for thriller/fantasy/adventure comics that centre on strong narrative over ridiculous gimmickry you really cannot go wrong with their output. They’re one of the most underappreciated micropublishers on the current British scene and an outfit who deserve all the extra readers we can push their way!

For more on Accent UK check out their website here. The Wolfmen books are available from their online store priced £3.00/£3.95.