Accent UK’s supernatural Western series with its surly monster-hunting cowboy Josiah Black is one that I’ve covered twice before (on the old Broken Frontier site Book One here and Book Two here) with lots of positives to say about its sheer escapist entertainment value. Following a gunslinger with a dark and tragic past WesterNoir combines familiar elements of cowboy-style heroics with horror, fantasy and noir stylings. 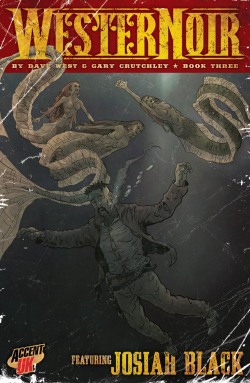 The first two issues of the book saw Black recruited to track down the malevolent forces that lurk in the shadows of the Old West. Book One set up the premise of the title while the second instalment saw him face up to a swamp-dwelling priestess and a clutch of alligator men! Given the cover of on the right it will not come as any surprise to readers of this review that the latest outing for Josiah involves him becoming embroiled in the machinations of a trio of scheming mermaids. With Book Three, though, the mystical weirdness is more colouring than main narrative thrust because this issue a subtle character study of WesterNoir’s protagonist takes the main stage.

After rescuing a young woman named Cassie from undue attention in a sleazy bar, Josiah becomes a guest aboard her gambling establishment, the Mississippi steamer The Siren’s Song, where she lives with her two sisters. Here the gunfighter begins to relax and contemplate a quieter world free of the butchery and violence he has come to know. But wherever this riverboat goes local people disappear. The newfound tranquillity of Josiah Black’s life will be shattered when the horrific truth about The Siren’s Song is finally revealed…

Shades of Mark Twain and George RR Martin’s Fevre Dream in this latest WesterNoir adventure, then, but co-writers Dave West and Gary Crutchley’s great triumph in Book Three is not in their creepy tale of aquatic demons living among humankind. Rather, this is the strongest issue of WesterNoir to date because the appeal of #3 is less in the dynamics of Black’s encounter with the siren-like merwomen – as tense and well-paced as they are – but more in what this interlude tells us about our protagonist’s doomed existence.

The more it seems like his time on The Siren’s Song may provide an escape from Black’s brutal existence the more obvious it becomes to the reader that this superficial happiness is going to be snatched away; as is standard for any tragic anti-hero. In this moment of reflection West and Crutchley ably re-enforce their character’s raison d’etre and the hopelessness of his fate, and makes him all the more sympathetic for it. With a hard-bitten leading man like Josiah Black it was always going to be a juggling act to maintain both that rugged vigilante persona and a relatable, empathetic side to this stalker of the paranormal but West and Crutchley succeed in this episode in quietly reminding us of the humanity at the heart of their creation.

Gary Crutchley provides his usual bang-up job on the visuals giving a feel of period authenticity that always has an air of underlying menace to it. His use of grey hues adds an understated texture to this character piece and also accentuates the moody ambience with his tight, packed panels adding to the claustrophobia of the issue. And his mermaids are undoubtedly the horrific stuff of nightmare – no Disney cutesyness about these deep water dwellers! It’s all topped off perfectly by Andy Bloor’s book design which continues to impress with its pulpy, distressed look.

I was very pleased to hear when talking to Accent UK’s Colin Mathieson at the last Comica Comiket in November that WesterNoir will be continuing beyond its initially projected four-issue run. It’s fast becoming one of my favourite serial comic style reads. If you’re a lapsed Marvel/DC reader looking to recapture that sense of unpredictability and high adventure that those companies used to represent then the world of WesterNoir sums up just what you’ve been missing!

For more on the output of Accent UK check out their website here. WesterNoir Book Three costs £3.50 and can be purchased from their online store here.