Tiny Pencil, the artzine that celebrates all things graphite, returned this summer with a second issue focusing on all-ages fun, games and activities. This edition, subtitled Mammals, Monsters & Mars!, is ostensibly aimed at a younger audience but after its most impressive debut earlier this year I would hazard a guess that for the bulk of TP’s readership the subject matter per se is irrelevant. It’s the experience of observing how each individual creator has interpreted that topic that is the pertinent factor. 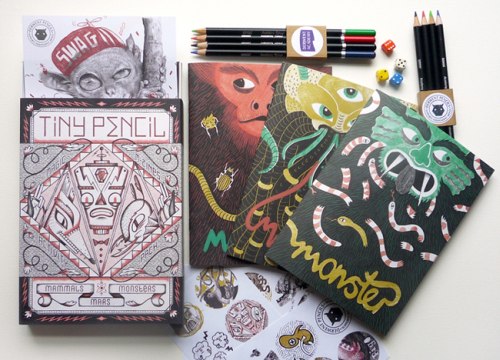 Those of us unashamed to profess our preference for the tangible over the digital will, no doubt, be pointing to the physicality of Tiny Pencil #2.0 as further evidence of the sense of tactile joy that only a material item can provoke.  Beautifully presented in a box illustrated by Kristyna Baczynski – an artist whose spellbindingly busy and intricate work I can just sit and stare at for ages – this issue comprises three minizines on the titled topics of mammals, monsters and Mars. Each one is jam-packed with interactive two-pagers from a heady mix of established pros, small pressers and creators who, perhaps, will be less familiar to a proportion of the audience. 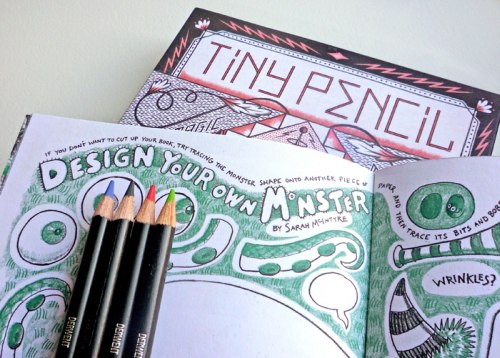 Emphasising the idea that this is an item the reader needs to engage with in a far more direct way the box also contains a set of coloured pencils, dice and a set of stickers. Oh the echoing pangs of nostalgia that will reverberate through your memory when flipping through the pages of these zines! They’re full of colouring exercises, spot-the-difference illos, Mad magazine style fold-overs, “board” games, mazes, and, of course, comics, to name just a few. Whether you’re of the younger age range that Tiny Pencil 2.0 is supposedly aiming at or, let’s say for the sake of entirely hypothetical supposition and as an obviously entirely random example, a fortysomething male a few decades beyond the apparent target age, the magical imagination of the creators on show here is going to reawaken a childlike sense of wonder in you. 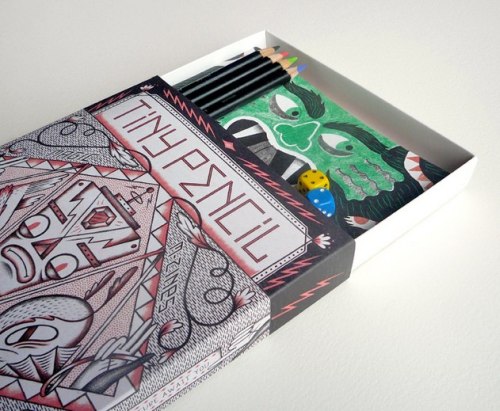 My personal highlights when reading through the zines? I can only mention the merest handful of the thirty-odd artists involved in the space I have here but there’s a lovely monster-hosted piece by Derek the Sheep’s Gary Northfield on mud larking on the Thames with Northfield’s usual lively and irreverent cartooning skills at the forefront. ink + PAPER’s David O’Connell provides a fiend-packed activity page with a distinct feel of Charles Addams to it. And Alys Jones, whose amazing Beyond the Wire I featured in this column back in May, offers a spooky ‘Monster Alphabet’ that showcases another side to her fertile imagination. 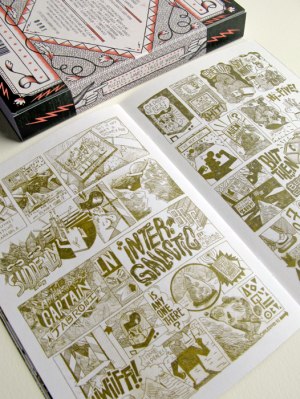 Moving to the Mammals and Martian zines Yoko Tanaka follows up on her haunting work from the first issue with another striking piece of pencilling, this time on a guide to prehistoric mammals. Welcome to Your Awesome Robot’s Viviane Schwarz gives us an enchantingly rendered ‘Martian Explorers’ game and Lizz Lunney ponders on the nature of the universe in another example of her wittily inimitable style. A special mention too to Katriona Chapman for ensuring we remember the physical properties of Tiny Pencil with that aforementioned fold-over entry…

Admittedly, after the rather dark and sometimes macabre visuals of the first issue’s “Into the Woods” subtitling there’s a marked change of thematic tone with this second offering. But I think that’s going to be a central part of Tiny Pencil’s appeal going forward. Think of it as a kind of lead-centred Solipsistic Pop/McSweeney’s hybrid if it helps. Tiny Pencil 2.0 demonstrates that the directions the project’s editorial team of Amber Hsu and Katriona Chapman can take the zine are endless. I eagerly anticipate hearing what they have planned for the third Tiny Pencil event!

For more on Tiny Pencil, including a host of creator interviews, visit the TP website here. You can buy a copy online here priced £14.95.