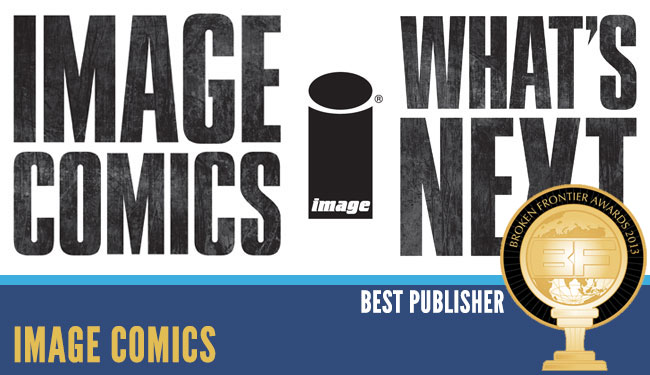 There are countless comic book publishers that are releasing spectacular work and who were considered for our Best Publisher category. Ultimately though, there was never any question about which publisher most deserved this award.

No longer content with a handful of big hits like Chew, Invincible, Morning Glories, and Walking Dead, Image came out of the gates aggressively in 2012 with the debut of a host of new exciting books like Bedlam, Fatale, Hoax Hunters, Manhattan Projects, Mind the Gap, Nowhere Men, Revival, and Saga. The world realised that Image was a publisher to be taken seriously.

To the uninformed, this might seem like Image won the award simply for having the most new books. But with Image, it isn’t a matter of quantity over quality.

Saga has been consistently one of the best books in the industry for the past two years. Here at Broken Frontier it won our awards for Best Writer, Best Artist, and Best Ongoing Series. I’ll let you read the articles on those individual awards for more information on what makes the book so good, but suffice it to say, we love this book.

Lazarus led the charge in our Best New Series category (beating out other Image contenders Pretty Deadly and Sex Criminals), while Storm Dogs was among the five books nominated for Best Limited Series.

Technically Matt Fraction’s Best Writer – Mainstream award only counts his Marvel work, but somehow how could you not end up factoring in his work on Satellite Sam and Sex Criminals into the vote? Those are two series, so wildly different in tone and story, that could only be told at a publisher like Image. That’s because they are willing to take chances on stories many other publishers might shy away from.

Image has shown countless times that no subject matter is too mature or taboo (The Bounce, Fatale,  Satellite Sam, Sex). No premise is too “weird” (Alex + Ada, Prophet, Sex Criminals). And, perhaps most impressively, that no book is too “small” as illustrated by great books with smaller premises like the two-part story about a radio talk show host who has to deal with a caller contemplating suicide in A Voice in the Dark, or Kieron Gillen’s less glamorised Spartan tale Three.

With all of the attention at Image being paid to their newer titles, it might have been easy to forget the their veteran books. Instead, the new blood has seemingly recharged some creators’ batteries. Morning Glories took a step forward by transitioning into season 2. Chew shook up the formula with a shocking twist at the end of 2012, and that energy has transferred over to this past year’s stories. Invincible and Walking Dead both celebrated milestones as Invincible reached #100 and Walking Dead celebrated its tenth anniversary in style with their biggest storyline yet in All Out War.

The company even found a way to make up for past mistakes (delays, unfinished series) by releasing new issues of Secret and Bad Dog.

The talent at Image currently ranges from established veteran creators, to today’s biggest stars, and the up-and-comers. The books reflect that range of talent, experience and taste. I mentioned over 30 unique titles in this article and that doesn’t even cover half of the titles that Image released this year. It’s that rare combination of quality and quantity above everything else that makes Image Comics the best publisher of 2013.