What if apps for super-powers were as prevalent as all our other social media and downloading tools? What if we could access fantastic abilities at the touch of a tablet screen? That’s the question writer Luke Halsall and artist Graeme Kennedy put to us in the first issue of iHero, their new three-issue series from Obscure Reference Comics. 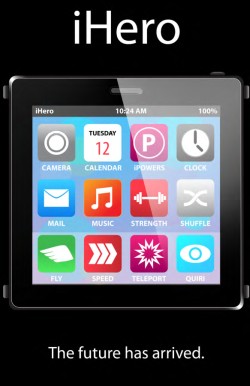 Created by I.T. guru Jack Taylor, the iHero is the essential social networking tool for the next generation. Not only can you access all the usual facilities available on other devices but it allows you to fly, to employ super-strength, to teleport and more. As everyone becomes super-powered, though, their use becomes less about personalising the device “to be the hero you want to be” and more about an escalation of ingenious applications for the iHero’s properties to get round the mundanities or the morally dubious parts of everyday life. Why do a day’s work when you can finish it in five minutes with super-speed?  Looking to keep that extra-marital liaison a secret? Then teleportation is your answer.

Eventually the inevitable happens and the iHero community is tainted by the stigma of super-villainy. In answer to this Taylor persuades Icon, the original super-hero of the 1930s, to head up a team known as The Hero Institute to act as champions to promote the good the iHero can do. But when Taylor dies mysteriously the group must investigate the mystery surrounding his demise…

Sometimes the most obvious ideas are also the most fun ones and iHero has a premise that, although requiring a suspension of disbelief even more pronounced than the usual super-hero title (the whys and wherefores of the tablet’s origins are largely left unexplained at the moment for example), has some real promise to it. Halsall’s initial exploration of the social implications of such a situation in the book’s opening pages is concise but witty. There’s a kind of Wagner/Grant dark humour to it and the opportunity for all kinds of tales about the inventive ways people would find for using their newfound abilities is an intriguing one indeed. The pastiche of a popular advertising campaign in this section raised a particular smile…

Graeme Kennedy’s art is occasionally a little raw in places but it does have a quirky charm to it, with his depiction of the super-powered acts that are the heart of this series moving from the cutely comedic at the beginning of the book to the powerful and dynamic towards the final part. He also has a good eye for visual humour that’s well realised in his character’s facial expressions.

The latter half of the book is a more standard tale of legacy heroes, Superman and Batman analogues and shadowy conspiracies, and I have to say that interested me far less than the playful and sharper set-up at the front end. Perfectly readable, but at this stage – and let’s not forget there are two more issues to go – it did feel a bit like ground well trodden. Hopefully the story potential in a society where everyone can become a costumed crusader with a tap of a screen will be further investigated in issues #2 and #3. That’s iHero’s greatest strength and one that I hope Halsall and Kennedy will exploit to its fullest as the run goes on.

To order a copy of iHero for £3.00 visit the Obscure Reference Comics online store here.