Since its publication in 1993, Tardi’s It Was the War of the Trenches (C’était la Guerre des Tranchées) has set the standard for World War I comics. But after 20 years there’s a new contender in town: Les Folies Bergére by Zidrou & Francis Porcel. 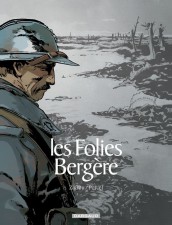 In the trenches of 1914-18, the infantry of the 17th Company are the proverbial mouse for the cat. The hopelessness of the situation is not lost on them, but they stand firm and ironically name their trench the Folies Bergère, after the famous cabaret music hall in Paris.

However, the war slowly shreds away every attempt at humour with blood and terror and, slowly but surely, they descend into the madness of trench life.

It’s no secret that I am a big fan of French writer Zidrou, whose comics have shown up multiple times in this column, but I think I can safely say that Les Folies Bergère is his masterpiece. It also presents a true collaboration with Spanish artist Francis Porcel, whose visionary tableaus translate Zidrou’s tight and metaphorical script perfectly.

Zidrou’s script slowly draws the reader in and takes its time to let us get close to the characters. But however quiet and – sometimes – humorous life in the trenches can be, up-and-coming artist Porcel’s chiaroscuro drawings remind us that the spectre of war always hangs over them like the sword of Damocles.

Slowly but surely, the madness creeps in as the corporal’s homesickness grows like a festering cancer in his head; the visiting pastor has strange visions of god and the devil; and a soldier snaps after having his leave withdrawn and cuts off the balls of his superior.

But why won’t he die after being executed? What is up with the little girl haunting the trenches between the Germans and the Allies? And why can’t Monet paint a good-looking frog?

There are no heroes in this story. There is no big action scene.  Nothing is black or white. This is just life. Life in the trenches. Real people stuck in a situation that no-one should ever have the misfortune to experience.

As those experiences become worse, the cracks start to show, and then Zidrou just hits you upside the head with a metaphorical twist. I won’t spoil it here, but your guts churn and all the sympathy and misery and heartfelt anxiety you’ve gone through as a reader come pouring out. And then it’s over. The end.

Except that for some, the war never ends, and it does not matter whether you are at the front line or back home.

And all the while, Porcel drowns the scenes in beautiful spotted blacks with a very succinct use of colour. His people feel real and his backgrounds are just plain stunning. Where Tardi’s famous graphic novel took a realistic approach, Zidrou and Porcel ground Les Folies Bergère in the real world but add a whole other level to this graphic novel.

Highly recommended and already on my the ‘Best of 2014’ list.

Les Folies Bergère by Zidrou & Francis Porcel is published in French by Dargaud. It is a full-colour hardcover counting 92 pages and retails for €19.95. This review is based on the Dutch edition published by Ballon Media.