This one’s for the youngsters with all-ages European books aimed squarely at young readers: Kill Your Mothers 2 & The Adventures of Timo. 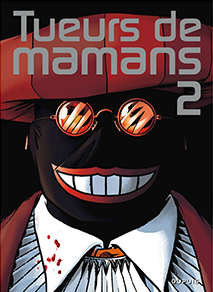 The first album of this series was reviewed here and I’m glad to say that the second album doesn’t disappoint. The revenge scenario that exploded as an intense cliffhanger is further deepened bn the first half of the book writer Zidrou who focuses further on the relationships of the girls between them and their family.

Zidrou seems to enjoy taking these unexpected turns and the emotional route, and he succeeds admirably without coming off as tacky or hysterical. For the target group, it is a very insightful and affecting book.

In the second half, the girl gang is back together with a plan to tackle the mysterious black avenger off the Castigo revenge site. Again, Zidrou manages to surprise us with a few twists and turns and the ending is both uncharacteristic and a shocker. If there is one way to describe it I would say that it mixes up the YA approach with seventies revenge movies done by Peckinpah. Very intense and highly recommended. As usual, Borecki & Ers illustrate it all with verve turning a sometimes wordy script into a clear and dynamic page. His cartoony approach suits our youthful protagonists perfectly is a nice contrast to the realistic violence that has penetrated these young girls’ lives.

Your Mothers 2 of 2 by Zidrou & Borekci & Ers is published in French by Dupuis. It is a full colour softcover counting 48 pages and retails for €12. This review was based on the Dutch edition published by Ballon Media.

The Adventures Of Timo by Alex Turk 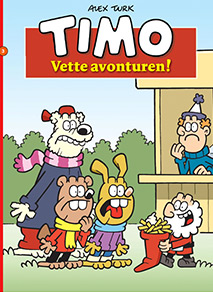 Strip 2000 is back with a whole slew of releases which I will be covering in the following weeks. First up is this wacky anthropomorphic gag series by Dutch illustrator Alex Turk aimed squarely at the young folks. Published in strokes in the Kidsweek Junior magazine since 2004, the first album in this series won the Best Youth Oriented Album in 2008 in Holland and the third album in this series continues in the same vein.

It all revolves around the flatfooted rabbit Timo and his adventures in a forest surrounded by his friends: a snack crazy bear, a grumpy gnome etc. We get treated to jokes involving soccer, ice cream, witches and snacks. The humour will certainly appeal to the kids and it involves a lot of innocent humour, bordering on the lame side of the humour border but on the other hand, that is probably why it is so funny to the younger crowd.

Turk’s cartoony and blocky drawing style befits the subject matter, innocent and uncomplicated, perfect for young readers. Not much to see here for the adult crowd but I definitely would hand this to my kids!

Adventures Of Timo by Alex Turk is published in Dutch by Strip 2000. It is a full colour softcover counting 48 pages and retails for €8,95.