‘Psychogeographical’ is one of the more tiresome and abused cultural buzzwords being chucked around at the moment, but it’s probably not a million miles away from describing the recent work of Bristol-based artist Simon Moreton.

While Oliver East’s travelogue comics (covered in part one of this feature) are about capturing the fleeting sensations of a location, Moreton – who trained as a geographer – adds the dimension of time to his work, going to the crossroads where place, memory and emotion meet.

His work typically takes the form of short, elliptical stories, often following a character or pointing the reader’s eyes through stripped-down snapshots of an environment. Sometimes they are explicitly framed as memories, with a spare commentary, and sometimes they are more loosely arranged as an evocative procession of images. Moreton’s restrained approach in both his writing and his illustration creates a quiet, meditative style that’s a perfect vehicle for his reflections. 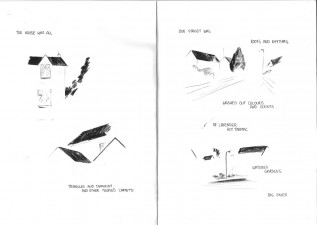 A look at the four most recent issues of his self-published comic, Smoo (issues 4 to 7), highlights the importance in his work of the environment around us and the emotional bonds we build with places – particularly in the early stages of our lives.

In #4, in which Moreton recalls his adolescent years in the small town of Marlow, west of London, the artist even includes a hand-drawn map of the town, tucked into a little envelope fixed inside the back cover.

#5 returns to an altogether more difficult time in his life, as a student in Falmouth, in the far south-west of England. In ‘I Didn’t Know’, for example, scratchy images are cast adrift in the middle of page-sized frames, creating a sense of constraint and isolation. 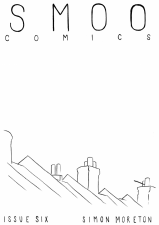 The next issue is less geographically specific, but still focuses on the importance of home and the environments that surround us. The stories ‘One Day’, ‘Summer’ and ‘Routines’ are evocative visual tours of the urban environment, while ‘Houses/Homes’ provides various vignettes of domestic interiors, hinting at the process of moving house and leaving room for readers to string them together with their own memories and reflections.

#6 was a much ‘quieter’ issue than its predecessor, but in #7, published earlier this year, Moreton moved on dramatically in both style and form. He switched from the more conventional A5 booklets of his earlier comics to an assemblage of three smaller pamphlets, a map and a letter. Like a less intimidating version of Chris Ware’s Building Stories, the pieces create a synergy, inviting the reader to put the elements together and create a bigger meaning.

The contents were inspired by a trip Morton made earlier in the year to Caynham, a village in the Shropshire countryside where he spent some of his early years. As he reflects on his childhood and the bond he still feels with the village, his conflation of identity and location reaches its culmination: ‘This place is in my bones’.

While Moreton refers to clearly defined locations we can find on the map – Marlow, Falmouth, Caynham – these comics also conjure up the ‘mythical’ versions of the places that now exist in Moreton’s imagination, the products of time and distance. Then, adding another dimension, they’re also presented as universal locations – the places where we’ve all had the sensation of ‘muddling through… messing up… wanting, always, to run away’.

I think this final, powerful aspect of Simon Moreton’s work derives from the dramatic change in his art style in the past couple of years. The stripped-down cover design of Smoo #5 heralded a paring down of his illustration style*; it becomes minimalistic, providing just enough detail for a reader to orient him or herself.

Citing a process hypothesised by Scott McCloud in Understanding Comics, it could be argued this lack of detail leaves the reader with the space to fill in the blanks; to project his or her own memories and responses onto the imagery.

(*The ghost on the cover is also a telling image; the narrator or viewpoint character of Moreton’s stories often seems like a revenant spirit, drifting unseen through a more concrete environment.)

Moreton makes some interesting choices in pushing his minimalist style; in one sequence in Smoo #7, a car driving through the landscape is gradually reduced to a handful of abstract lines, and then – in a brave and intriguing move – to a series of totally empty panels across a number of pages.

I know I might be reaching a bit here, but the first thing that came to mind when I read those pages was John Cage’s famous/notorious ‘silent’ composition 4′ 33″; while that work forced the listener to consider the ambient noise around them, making each performance of it unique, maybe Moreton’s empty panels again invite the reader to pause and consider their responses to what they’re reading.

Reading Smoo gave me a strong sense of nostalgia – in its literal cobbled-together sense of ‘the pain of returning home’. It made me think of growing up in the small town that I left more than 25 years ago but could still map out, street by street, in my mind.

It reminded me of the key locations from my childhood that are no longer there, having fallen under the developer’s bulldozer: the house I grew up in, my primary school, even the bus station where I bought my comics as a teenager. All from a few well-chosen lines on a piece of paper.

Moreton is currently working on a book-length memoir for Jordan Shiveley’s Grimalkin Press.  I look forward to it, and hope it can propel his highly evocative work to the wider audience he deserves.

Distribution details for Simon’s work, including Smoo and Grand Gestures (published by Retrofit Comics), are available via his site. He also administers Better Drawn, a blog of short comics drawn by people with experience of living with long-term mental or physical illnesses.