Before I begin my reflections on Douglas Noble’s Youthful Attack I want to return to a soundbite from the great man himself about his comics from our 2012 interview Noble Intentions: The Eerie World of Strip For Me that eagle-eyed readers will remember I have quoted before here in ‘Small Pressganged’:

“Anything that a reader finds in there is theirs to take away.” 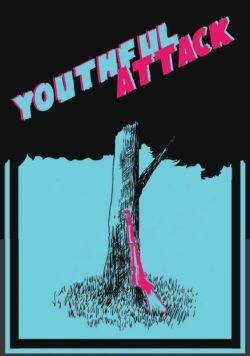 You know, those twelve words should be taken as a mantra when approaching Douglas Noble’s work. As I’ve argued before he’s one of the most unique voices in British small press comics, weaving oblique tales that are often delightfully frustrating in their teasingly obscure nature. Always unafraid to make the audience work, and never one to shy away from telling stories that make few concessions to narrative transparency, he’s a true one-off.

When I first read the apparent “premise” of Youthful Attack though – that it was a re-creation of a long-forgotten Merrill’s Marauders strip in a 1952 issue of war comic Attack! from short-lived publisher Youthful Comics– I was actually rather surprised. That’s not unusual with a Noble offering… expect the unexpected after all. But although Youthful Attack sounded like an experimental piece it seemed, if it’s not a non-sequitur, far too conventionally experimental. A simple re-imagining of a little known back issue focusing on jungle warfare? Surely not.

And, it goes without saying, there’s far more to the exercise than that. The first clue is in the pre-story dedications to Brit creators Oliver East, Simon Moreton and Robin Barnard. Barnard, of course, is the creative force behind the Images Degrading Forever blog that uses the exercise of recreating classic comics work to analyse the original art and its meaning. Moreton (Smoo Comics) and East (Trains… Are Mint and Swear Down) are two masters of the landscape comic, creating comics that act as travelogues or make environment an intrinsic character within the narrative.

So a tribute of sorts to the disparate projects that sum up Moreton and East’s approach on the one hand, and Barnard’s on the other? That would be my understanding and that’s because what we have in Youthful Attack is a war comic that initially seems to be a Noble take on that ‘50s era of gung-ho battle action before midway, in the heat of battle, it segues into something very, very different.

Avoiding giving too much away, it’s here that we move back from humankind and its petty conflicts, and the book becomes essentially a landscape comic. A tour of a terrain that is indifferent to the fighting that has been going on in its environs. It echoes something else that Noble said in that aforementioned interview about how he finds the lack of humanity in the natural world to be terrifying (“There’s nothing as monstrous as a waterfall.”). And it’s here that his art comes into its own, giving what should be the beauty of this lush environment an alien quality; a lack of response to the carnage around it that has an air so detached, so unconcerned, that it’s borderline sinister. 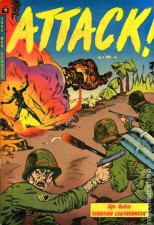 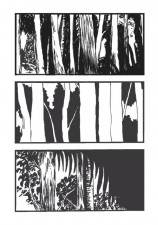 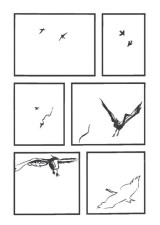 The cover of the original 1952 Attack! #4 and some of the more contemplative pages from Noble’s take

Part mark of respect to inspirational creators, incorporating playful adaptation, and a return to previous themes seen in the body of Douglas’s Strip For Me comics then? That’s what I took from Youthful Attack. Of course I could be completely wide of the mark of what his original intentions were. But, going back to our Noble “mantra” at the top of the page, that’s what I found there. That’s what I’m taking away. And it’s all mine. But I’m sharing it with you because I like you.

What isn’t in doubt, though, is that there’s no one in the small press who makes me think about their comics in quite the same way as Douglas Noble does. That’s a trait that is refreshing, welcome and one that keeps me coming back to his work time and time again.

For more on Douglas Noble’s work check out his site here. Youthful Attack will be on sale at Thought Bubble at Table 149 in the New Dock Hall.