Reading the entire run of Joe Sparrow’s Omnipathy – a series of minicomics offering self-contained stories in genres that have so far included science fiction, horror and fantasy – in one sitting, in preparation for reviewing the third issue here today, I was immediately struck by how noticeably it traces the emerging confidence of Sparrow as a creator. The largely forgettable stories in the pixellated first issue are replaced by an intriguing and disturbing tale in the second issue that, nonetheless, still suffers from some confusing storytelling in places. By the time we reach issue #3, however, Sparrow has most definitely found his voice with a double header of shorts that far surpass anything offered in the first two editions. 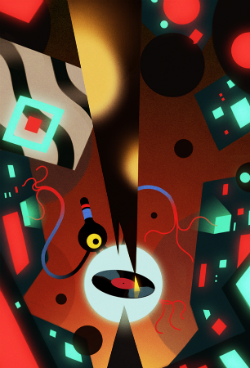 In the first story ‘The Indigo Sonata’, the destruction of a certain third planet in a familiar solar system sends a sole artefact – a vinyl record – spinning out into the cosmos. There it is discovered by spacefaring alien lifeforms who attempt to ascertain its purpose. But with no contextual background to aid their interpretation of this odd object they are left to find their own philosophical meaning from its arrival in their midst.

There are echoes here of that classic Alan Moore story from Tales of the Green Lantern Corps Annual #3 wherein a sightless extraterrestrial character with no frame of reference for concepts like “green” and “lantern” ended up taking on the name of “F Sharp Bell”. Sparrow creates a truly alien stellar realm where language, conceptual thinking and perspective are totally removed from our own. It’s his use of colour as language, though, that marks this out as a truly clever use of comics specifically, creating a civilisation that is entrancingly unfamiliar in its realisation. A beautiful and true synthesis of words and pictures.

The second entry in this issue, ‘Nicolas and the Dragon’, is more fantasy-based, taking an old standard of fairy tales – a monstrous creature holding a kingdom to ransom and demanding daily tributes – and turning it on its head with a neat twist. Admittedly it’s following a certain tradition of the genre but this tale of a wily but largely ignored court wizard taking on a fire-breathing monster with guile and craftiness deviates from its audience’s complacent expectations by its end. Again, the use of colour throughout – orange, brown and red hues – to accentuate the fiery menace that has descended on the people of this land adds a whole extra layer to the strip. Sparrow describes it as “over-worded” in his endnotes but I would disagree with that; the narration and melodramatic dialogue are in keeping with its identity as a fable in comics form.

Omnipathy #3 stands out as a piece of gorgeous graphic design as much as it does for its storytelling themes. It’s been a long time, indeed, since I’ve seen such an adept use of colour to further narrative intent on the comics page and, given the huge leaps in quality between each of the issues to date, I can only suggest we all keep an eager eye out for a potential fourth issue of Omnipathy…