This neat little collection offers a showcase of Phil Elliott’s Tales from Gimbley – the core work of one of British small press comics’ early giants. 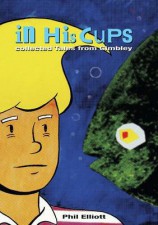 Phil Elliott plays such a key role in the history of British small press comics that it seems odd that the recent publication of In His Cups: Collected Tales of Gimbley hasn’t been greeted with more of a fanfare.

It’s probably not a stretch to claim that the current proliferation of UK comics art shows like ELCAF, the Comika Comiket and the new Safari Festival can trace their lineage back to the monthly Westminster Comic Marts of the early 1980s – and the now legendary post-mart socialising at the adjacent Westminster Arms, where the cream of British comics creators, both mainstream and alternative, blew the froth and made plans.

The lightning rod around which the small pressers of the time gathered was the Fast Fiction stall and distribution service run by Paul ‘Man at the Crossroads’ Gravett.

Inspired by the activity, Phil Elliott (along with Ian Wieczorek) borrowed the name and launched the Fast Fiction anthology that subsequently provided a platform for a group of talents such as Eddie Campbell, Glenn Dakin, Ed Pinsent (who later edited the zine), Carol Swain and many more.

Elliott’s main output at the time – and the thread which has run sporadically through his subsequent career – was his Tales from Gimbley, a wide-ranging series in which a middle-aged man looks back with the benefit of hindsight at the antics and misadventures of his generously bequiffed younger self.

This comprehensive collection starts with the very first tale, published as a tiny A7 comic in 1982, and while the artwork might be a little rougher than you’d expect in the light of some of Elliott’s later, more familiar work, it embodies many of the themes that run through the entirety of the series: drinking, the artistic life, friendships and relationships.

Indeed, if you associate Elliott’s work more exclusively with the Joost Swarte-inspired clear line style he later developed, some of this early material might come as a bit of a shock. However, it’s fascinating to trace the development of his style almost month by month, and the inclusion of various ‘out-takes’ allows a fascinating look at a couple of scenes played out in different ways.

One of the beauties of the 184-page collection is the way Elliott uses the Gimbley conceit to wrap a wide range of stories, from multipage ‘epics’ that bear the influence of Eddie Campbell’s contemporaneous Alec work to newspaper-style gag strips and his trademark poetic one-pagers, unpacking a tall tale or an emotion remembered.

And throughout all these tales of the mundane and the marvellous, we have the nagging notion at the back of our mind that old Gimbley might be the archetypal unreliable narrator – the Incredible Bullshitting Man propping up the bar and buttonholing anyone who’ll listen during a langurous afternoon session.

I can’t really pretend to be objective about these stories: they send me into a nostalgic reverie for not only my own Gimbley-esque youth*, but also the pre-Tumblr age of discovery in which they – and the rest of the Fast Fiction/Escape/Harrier New Wave work – appeared.

However, this is a very neat and economical little paperback (and the PDF is even more – almost laughably – economical, at £2.00), and the development and variety of the work contained within make it a valuable recollection of what was a bright dawn in the UK small press comics scene.

* As Eddie Campbell put it so memorably, “On some warm summer evenings, you uncork the bottle and the situations come tumbling out like circus acrobats”.