Over Under Sideways Down gives a voice to the plight of those whose experiences far too often go unheard.

This week has seen a series of events across the UK to celebrate Refugee Week – seven days dedicated to acknowledging the contribution of refugees to the country and designed to promote a stronger understanding of why people seek sanctuary from oppression here.

To bring the story of just one of those refugees to a greater audience British graphic novelist Karrie Fransman (a 2012 Broken Frontier Best Graphic Novel Award nominee for her sublime The House that Groaned) has teamed up with the Red Cross to produce the comic book Over Under Sideways Down for Refugee Week – the true tale of teenager Ebrahim, forced to flee from Iran at just age 15 and make a long, arduous journey to Turkey en route to a new life in the United Kingdom. 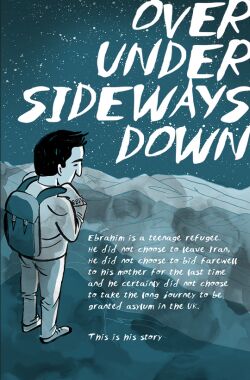 Over Under Sideways Down is one of those projects that not just recognises but embraces that unique ability of comics as a form to efficiently communicate personal experience in an educational and immersive way. In her introduction to the story Fransman is at pains to underline the impossibility of fully capturing the true terror of Ebrahim’s ordeal on the comics page. But any reader coming away from this comic feeling they haven’t shared the intimacies of Ebrahim’s plight to at least some significant degree – the loneliness of his exile, the sense of being uprooted from everything familiar, the horror of leaving everything you love behind you – would be doing her storytelling the most grave of disservices.

Tracing Ebrahim’s long struggle for sanctuary in the United Kingdom, Fransman diligently records his horrific experiences in escaping the same persecution that cost his father his life for his political ideals. Brutal treatment at the hands of the agents charged with facilitating his escape, a terrifying journey confined in a truck for two weeks, and the indifference and disbelief of the British authorities when he finally reaches these shores are just a handful of the trials he must overcome on his way to a new life.

Earlier this month, I had the honour of being asked to introduce Ravi Thornton’s graphic novel HOAX Psychosis Blues – a book Fransman contributed to along with a number of noted British comics artists – at its launch in Manchester. During that talk I spoke about a number of UK creators that I termed the “new wave of British graphic novelists”; a group in which I firmly placed both Fransman and fellow HOAX contributor Hannah Berry. Artists who continue to excite and inspire with graphic novels that push the medium in this country by actively seeking to break out of the confines and traditions of mainstream genre comics.

That designation is firmly in evidence in the pages of Over Under Sideways Down. It’s obvious from the outset that Fransman has been particularly motivated by her subject, providing a masterclass in the storytelling tricks that only comics as a form can achieve. Clever visual metaphors, inventive use of speech balloons, and brilliantly imaginative and playful uses of the sequential foundation of the comics narrative abound throughout. Yet despite this elaborate and assured usage of the complex language of the form Fransman’s work here is always subtle in structure, never burying Ebrahim’s story in overly exuberant visual ostentation. As ever, Fransman is economical in line and yet always substantive in both intent and delivery. 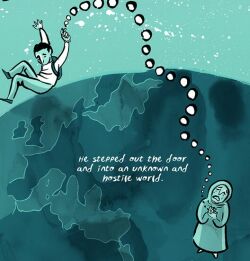 One of the underlying themes of this comic is that Ebrahim – and those in similar positions –  don’t choose to be refugees. A review is not a place, perhaps, to be political point scoring but as sections of the UK and, in particular, its popular press continue to bandy terms like “asylum seeker” about with a deliberately derogatory and derisive flourish it’s refreshing indeed to see a comic like Over Under Sideways Down that cuts through the xenophobia and focuses on the humanity of the situation. Informative, emotionally resonant, and an evocative rendering of an inspirational story, Over Under Sideways Down gives a voice to the plight of those whose experiences far too often go unheard.

Bravo then to the Red Cross for acknowledging the power of comics to convey these events, to Karrie Fransman for recreating them with such haunting but ultimately heartening passion, but most of all to Ebrahim for having the courage to share his remarkable story with us. A sterling piece of comics craftsmanship with a vital message to impart.

Over Under Sideways Down has been distributed free as an educational publication but you can read the entire comic online here. Find out more about Refugee Week here.