Sick and tired of the European art world’s conservative outlook on his paintings, Paul Gauguin moved to French Polynesia in the late 1800s in search of a second lease of life. In Gauguin, writer Maximilien Le Roy paints a portrait of an artist revived in his spirit and lust for life. Gauguin’s works, featuring vivacious portraits of Polynesian women with bold streaks of colour and added levels of symbolism, stand in stark contrast to his feisty attitude and rants about the small mindedness and corrupt establishment he felt had a firm hold on the European continent. 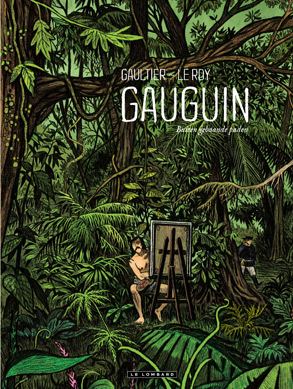 Much has been made of Gauguin’s contribution to the world of the arts, so writer Le Roy and artist Christophe Gaultier focus on the man, lending a refreshing perspective on this great painter.

They delve into Gauguin’s final years, starting with his arrival on the island of Hiva Ao. Gauguin succumbs to the siren-like call of the bottle and the local women, but seems to find a new and divine inspiration from both. However, what stands out is the creators’ focus on Gauguin’s character.

Le Roy & Gaultier’s Gauguin is a walking force of nature. He fornicates, boozes and rants his way through the local village and its inhabitants. He makes an enemy out of the local priest, warning the locals to not let their children frequent the Catholic school because it will poison their minds.

He also makes himself extremely unpopular with the local French constabulary and justice system, thanks to his anti-colonial rants, while his landlord is not overly pleased with Gauguin’s penchant for wild parties on his rented property. 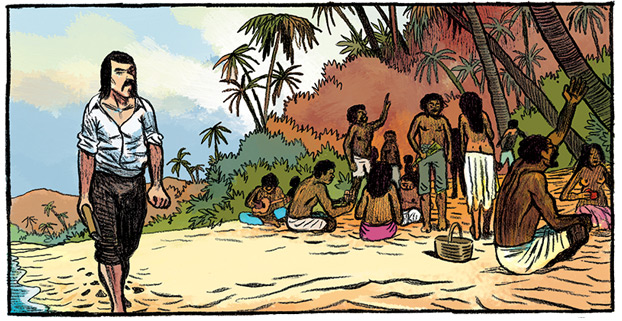 Throughout all of these fragmentary scenes, though, there is one thing that shines through: his devotion. He may not be the most lovable man, but he sure is passionate! Le Roy does not lose himself in an intense character study, but just wants to paint a picture of Gauguin in broad strokes, emphasizing his fervent ardor for politics, morality and the arts.

Christophe Gaultier then illustrates it all with panache. His broad linework complements the story well and he switches styles ever so subtly – and sometimes not so subtly – whenever the story demands it, playing to the strength of the script. The raw visuals mirror the inner workings of Gauguin, as the painter proceeds to trump his way through the final days of his life. 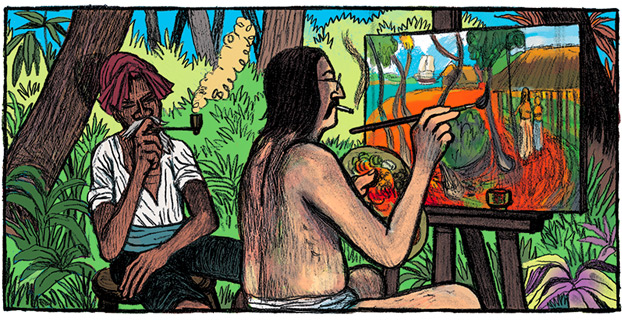 The only fault I could find in the artwork lies in the colouring, which often is quite literal and muddy. There is an overemphasis on ‘realistic’ colours (wood is brown, sky is blue, a shirt is white etc), and the brown tints in particular are overly present. Gaultier’s woodcut art style would have worked better with a lighter and more creative approach to colouring.

Highlighting the last days of Paul Gauguin in Tahiti, Le Roy and Gaultier’s vignette-like approach paints the picture of a tortured but vivacious artist, subverting our views of the painter and transforming him into a fervent Marxist and free thinker.

Gauguin by Gaultier & Leroy is published in French by Le Lombard. It is an oversized full-colour hardcover counting 88 pages. It retails for €19.99. This review was based on the Dutch edition, published by Ballon Media.