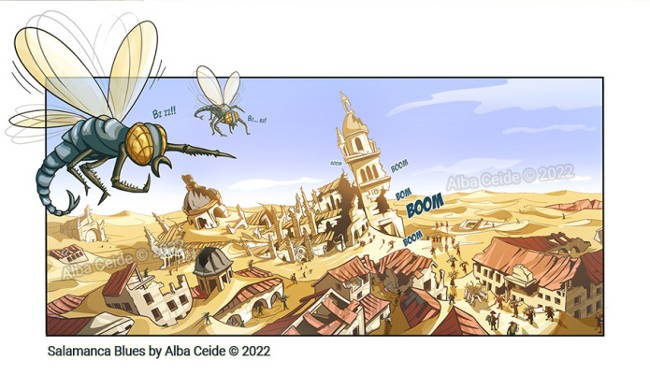 With a timely relevance Alba Ceide’s Salamanca Blues Part 1 was recently launched on IndieGoGo, bringing her first longer-form work one step closer to a print edition. Part of Ceide’s Earth Blues series of comics exploring environmental issues it’s obviously very much in the vein of two of her short comics Forehead Blues and Marghera Blues, both recently reviewed here at Broken Frontier.

Sometime in a future where the Earth has been devastated by climate change, the once flourishing Spanish city of Salamanca is now a collection of ruined structures in the midst of an unforgiving desert. Humanity is near to the precipice of extinction and the wastelands are home to giant predatory lifeforms.

This is a civilisation that has regressed into superstition, brutal ritual, and religious extremism, and is intolerant of any who challenge the status quo. In this first issue we are introduced to three characters who have fallen foul of the authorities and are forced to flee together from their clutches. We meet the mysterious Hunter whose defiance lands her in jail, illusionist Mimo whose street performances are considered heresy, and a former priest whose questioning nature also leaves him in a precarious position. Escaping Salamanca, and pursued by its religious zealots, they must survive the perils of the savage environment outside the city… 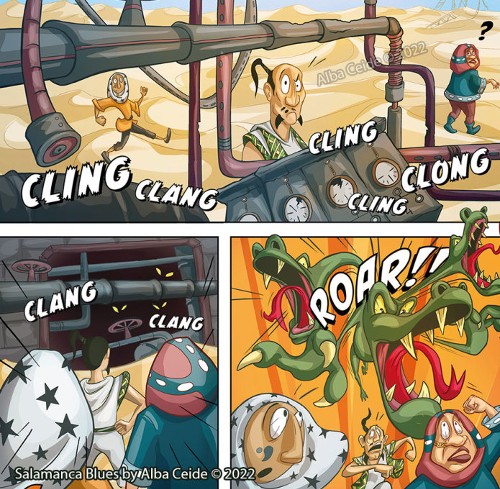 Ceide’s work on the Earth Blues series blends a quirky, animated style of cartooning with serious exploration of topical issues; the apparent incongruity of presentation and subject matter actually ensuring that the gravity of events feels all the more pronounced. This post-apocalyptic story’s first chapter ‘Sand’ runs for 40-plus pages, balancing its intricate world-building set-up with establishing a group of quirky characters for readers to identify with.

Slapstick violence and dark comedy are tools that Ceide uses to draw us into the story on a surface level but once there we become invested in the deeper subjects she is tackling. Salamanca Blues is a tale that doesn’t just mirror the ecological concerns we are living through in 2022 but also touches on ideas of religious intolerance and bigotry. 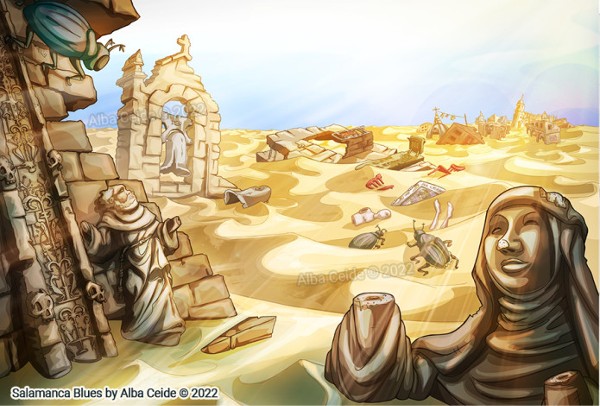 Exaggerated character designs give the action a kinetic energy and Ceide is adept at using lettering/speech balloon tricks in combination with playful characterisation. Mimo’s communication barriers are highlighted by the way she speaks in pictures early on, while later sequences make use of indecipherable characters to denote unknown language that nevertheless have a melodious quality that reflects the mood of their speakers.

Anyone familiar with Ceide’s minicomic The Lucky Horn will already be aware of her skill at employing teasingly meta techniques in her comics. There are a number of strong uses of comics’ unique relationship with the passage of time, and one particularly clever sequence where characters fall through panels and into the gutter of the page.

Those wanting to back Salamanca Blues Part 1 can do so here via the crowdfunding campaign. There’s a reason why we named Alba Ceide as one of our Broken Frontier ‘Six to Watch’ for 2022, and this comic is the perfect showcase for her work for the uninitiated.