The most notable aspect of Molly Mendoza’s comics for me is the way they unlock the full potential of the form; absolute graphic storytelling that isn’t simply a combination of words and pictures but the purest synthesis of the two, every narrative tool working in perfect symbiosis to complement and enhance each other. Mendoza’s recent comic Stray, from up-and-coming indie publisher Bulgilhan Press is an excellent example of this. Narration, imagery, colour and lettering choices all carefully crafted to utilise every aspect of the medium to their fullest communicative capacity. 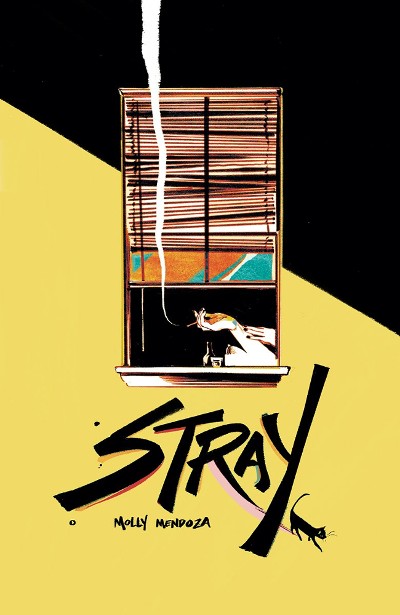 Stray is the story of Jack, a self-sabotaging individual whose relationships with friends and lovers are the focus of these near 50 pages. Jack is unable to let go of their memories of their recent relationship with Amelia and move on. Their wallowing in the past and self-obsession is a source of frustration to friend Cody, and through flashbacks we observe the personality clashes that ulimately doomed their relationship with Amelia. When Jack meets Stray their life begins to take a different path as the future slowly begins to to replace the past as their ultimate focus… 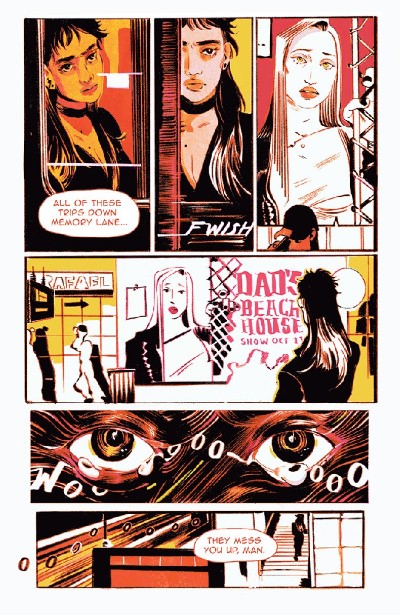 Mendoza explores Jack’s world not just through dialogue interactions between characters but also through the narrated considerations of all members of the cast. Jack’s own musings are often self-destructive and indicative of someone emotionally damaged. But we also get the perspectives of the other three characters, allowing us insights into their personality and outlook from other vantage points, all coalescing into a far more nuanced character portrait. Mendoza’s use of language is extremely potent here; often poetic, sometimes quietly devastating, and profoundly connective in its raw honesty. Colour coded lettering also adds to the feeling of switching viewpoints. 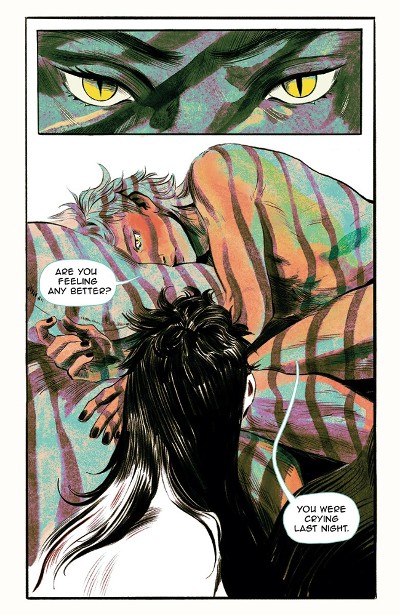 Of course, Mendoza’s art is likely to always be the initial draw to a casual reader (Best Artist for The Drake’s Sword in last year’s Broken Frontier Awards) as anyone who has read the awe-inspiring fantasy graphic novel Skip will attest to. In Stray Mendoza uses colour to stunning effect to create feelings of melancholy and a sense of reflection. Panels sit on other panels or across larger illustrations to bring us more immediately into the time and environment of events, or to emphasise contrasting emotional states between characters, while Mendoza’s use of visual metaphor in an early break-up scene is heart-breaking in its power.

For all its critical acclaim, Molly Mendoza’s practice deserves a far, far greater level of recognition. Stray is already one of my top indie picks for 2022 and a comic that I have no doubt will be on many commentators’ end of year lists in a few short months.