Titan Comics has provides BF with their May 2014 Solicitations For July 2014 shipping.

DOCTOR WHO: THE TENTH DOCTOR #2

ON THE DAY OF THE DEAD, THE MYSTERY DEEPENS – IN A BRAND-NEW BROOKLYN ADVENTURE FOR THE TENTH DOCTOR!

All Gabriella Gonzalez wanted was to skip her shift at the Laundromat and hang out with her friends. It’s Halloween, and Sunset Park is hosting its first-ever Day of the Dead festival!

But her father wouldn’t listen – again – and now Gabby is stuck with a store full of empty washing machines while the rest of the neighborhood goes wild.

But this graveyard shift is living up to its name! Vortexes explode out of the machines, shadowy creatures stalk on the edge of sight, and Gabby finds herself pursued by unearthly forces.

Finally, on the longest night of her life, Gabby is trapped in a powerless subway car – and the only thing standing between her and horrific death-by-monster is some skinny guy in a suit – who’s waving a blue flashlight around!

If Gabby survives this – she’s going to kill him!

THE ALL-NEW ADVENTURES OF THE ELEVENTH DOCTOR CONTINUE, AS TERROR STRIKES A RECESSION-HIT PARADISE!

When the Doctor last visited Rokhandi, it was a planet of such stunning natural beauty that an entire solar system had sworn to preserve it. What better place to take new companion Alice Obiefune on her first off-world adventure?

And it would have been a magical vacation… if the TARDIS hadn’t overshot by fifty years. Now the austerity-hit pleasure planet has become a ‘theme safari’ corporate hell, overrun by eerie, giant-headed mascots and a trillion tramping tourist feet!

But there’s something more sinister at play than rampant commercialism and ecological devastation… and the Doctor and Alice need to uncover all of Rokhandi’s long-buried secrets if they’re to escape with their lives!

Writer Al Ewing (Loki: Agent of Asgard) and artist Simon Fraser (Grindhouse) request that you have a nice day, whichever system you’re from. We hope to SERVE YOU again in the future!

Spun from the new survival horror game The Evil Within™ from Bethesda Softworks this all-new prequel invites readers to experience the deranged world created by Shinji Mikami.

It’s the beginning of the end for some unlucky inhabitant of the world of Lenore! The fight that’s been building for over a year is finally here and the sleepy town of Nevermore will never more be the same! (Did you see what we did there?)

Yes, Round One of what’s being billed as the battle of the century, well at least in this office anyway, is about to kick off and it’s going to get pretty ugly, pretty darn quickly!

From the glorious, ghastly, gothic and grotesque mind of Roman Dirge comes the latest chapter in the story of Lenore: The Cute Little Dead Girl, a chapter that heralds the doom of a fan-favorite and much-loved character – but who you ask? Well, you’ll just have to buy Lenore #10 to find out!

SALLY OF THE WASTELAND #2

SHE’S THE CAJUN QUEEN OF CARNAGE!

The hellspawn of Victor Gischler (X-Men, Angel & Faith, Noir) and newcomer Tazio Bettin, Sally is as sexy as she is psychotic. She and the crew of the Mississippi Duchess have found their trip down the mutant-infested bayous of post-apocalyptic Louisiana, interrupted by giant killer crawgators!

Their ship sunk, the crew scattered, Sally is keen to find out what became of her dumb blonde himbo, Tommy. However, she has drawn the unwelcome attention of a boatload of unsavory cannibal types… 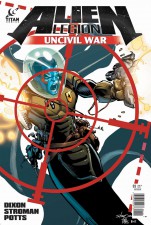 THE BAND OF BOSPERS IS BACK!

The slime of the cosmos has been heat-tempered into the diamond-sharp tip of the Galactic Union’s armed forces. But the battle-hardened veterans of the Legion’s toughest unit, Force Nomad, will need all their experience to blast their way out of a peacekeeping mission turned rammin’ red hot! 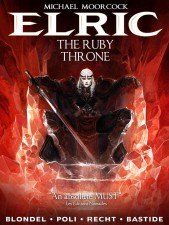 A STUNNING NEW COMIC ADAPTATION OF THE CLASSIC ELRIC OF MELNIBONÉ NOVELS BY MICHAEL MOORCOCK!

The ancient island of Melniboné has been ruled by Elric, the albino emperor, for millennia. Reliant on magic and herbs for his strength and prolonged life, Elric’s grip on Melniboné is crumbling, as his people slide into decadence. Now his envious cousin Yyrkoon, Prince of Melniboné, plots to overthrow him and claim the Ruby Throne for himself!

Lavishly illustrated, this new comic adaptation has been produced with the full and enthusiastic endorsement of Moorcock himself, who has written an original introduction for this edition. 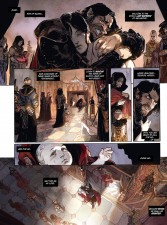 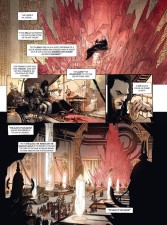 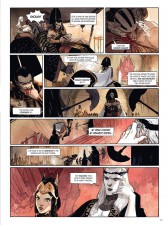 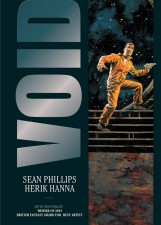 The crew and inmates of Goliath 01 have been massacred by the twisted Coloner Mercer. Now this prison ship in space drifts, powerless and empty – but for the dead.

John, sole survivor of the massacre, must find a way to escape this floating, oppressive tomb –without falling prey to Mercer’s murderous attentions…! 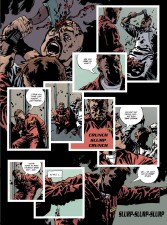 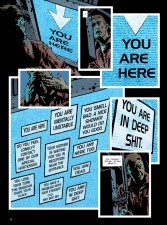 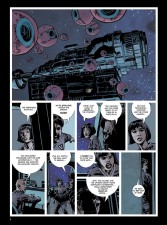 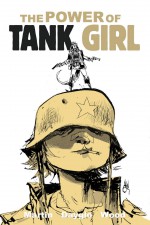 THE POWER OF TANK GIRL

Tank Girl’s back with a bang in this Booga’s-pouched-sized collection of three epically insane, depleted-plutonium adventures: The Gifting, Visions of Booga and The Royal Escape.

This thrilling mix of swordplay and mythological terror finds exiled knight James Dunrith – the Black Dragon – banished for nercromancy and heresy. He returns home to find England in turmoil and is recruited by the beautiful Eleanor of Aquitaine to rally the powers of Nature against a ghastly tide of evil! 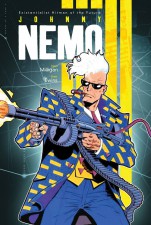 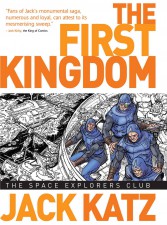 FROM STONE AGE TO STARSHIP!

With the conclusion of The First Kingdom, human champion, Tundran, and his children, fulfil their ultimate destiny and bring down the pantheon of the gods, heralding a new epic!

From a far-flung future of space-faring humans to races of strange new gods, The Space Explorers Club is published here EXCLUSIVELY for the FIRST time by Titan Comics, expanding what is considered by many to be the first true graphic novel!

Spawned by legendary artist and writer Arthur Suydam – blockbuster cover illustrator on Marvel Zombies – Cholly & Flytrap are survivors on a distant planet, barely held together with catgut and scar tissue, Cholly’s always there with a snappy one-liner and quick-draw machine-gun fire. Flytrap is silent as the grave, built like a brick privy and graceful as a charging rhino.

Collected for the first time EVER, this volume contains ALL of Cholly & Flytrap’s tales of derring-do, grievous bodily harm and giant bat riding! 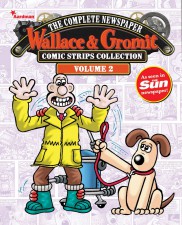 This second volume of the complete newspaper comic strip collection continues the daily comic-strip adventures of Wallace, the world’s most famous inventor, and Gromit his ever faithful and resourceful canine companion as they frantically struggle from one harebrained scheme and outlandish invention to the next all in the pursuit of an honest buck. Packed with jokes, gags, gadgets, and punishingly phunny puns this collection contains all 318 strips from 2011 – 2012 when W&G set off on a cheese tour of Europe, battled out-of-control Halloween teddybear robots, went treasure hunting off the coast and made their own blockbuster movie!